The “safety surge,” dubbed SafeTrack, “accomplishes in one year, work that otherwise would take about three years to complete.” It comes at a time when major Metro track problems and electrical fires seem to be increasingly commonplace.

The plan involves fifteen long-duration track outages between June 4 and May 8, 2017, to allow for extensive track work.

The goal: to achieve “safety and state of good repair of basic track structure.”

So what can Reston riders expect? First, there will be a moratorium on early system openings and closings — the system will close at midnight, seven day a week.

There are no outages planned for the new Silver Line track that opened in 2014. However, work on older portions of the Orange and Silver line will cause delays.

The following track outages will affect Reston Metro riders, according to WMATA. 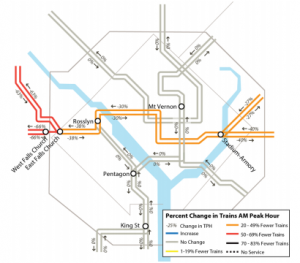 In order to maximize productivity, all of the track outages will be continuous and will affect rush hour service. For the line segment shut downs, buses will replace trains around the station closures.

The safety surge will not only affect Metro riders, it’s expected to affect those who drive as well, in the form of additional traffic.

Metro's GM says road projects may have to adjust in areas when huge Metro projects are taking place. #wmata @nbcwashington

Metro shutdown is so huge, traffic signals may have to be retimed to accommodate more drivers. #wmata

Here’s what Rep. Gerry Connolly (D-Va.) had to say about the plan.

After the jump, the full press release from Metro.

Wiedefeld’s SafeTrack plan includes 15 “safety surges” over the next year that will accelerate maintenance on Metro’s rail system from the ballast up. By closing the system at midnight on weekends and expanding weekday maintenance opportunities, the plan addresses FTA and NTSB safety recommendations and deferred maintenance backlogs while restoring track infrastructure to good health.

SafeTrack accomplishes in one year, work that otherwise would take about three years to complete.

Fifteen “safety surges” are planned that will allow track crews to exponentially increase productivity and achieve safety results for customers faster. These long-duration track outages use either around-the-clock single tracking or line-segment shutdowns that will impact rush hour commutes. Metrorail riders will be encouraged to consider using alternate travel options while safety surge work is in effect on their line.

In addition, Wiedefeld announced a moratorium on early openings and late closings. Closure of the Metrorail system at midnight seven days a week will begin Friday, June 3.

“This plan is going to take some sacrifice from all of us,” Wiedefeld said. “But it is clear that the current approach is not working, more aggressive action is necessary.”

Following the review and consideration of traffic mitigation and alternate travel options by the Department of Transportation (DOT) agencies in the District of Columbia, Maryland and Virginia, regional law enforcement, Office of Personnel Management (OPM), Department of Homeland Security and General Services Administration (GSA), a final version of SafeTrack will be released for riders on May 16.

“Metro’s safety culture change depends on support from the entire region,” said Wiedefeld. “We have to begin by understanding that safety trumps inconvenience.”