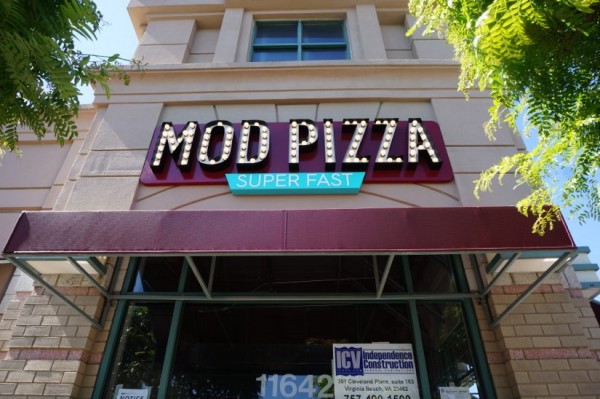 Two vacant spaces at Plaza America are deep into the renovation process and plan openings this summer.

The sign for MOD Pizza recently was installed — along with a wood-burning pizza oven and other fixtures — at the space at 11642 Plaza America. MOD Pizza signed a lease for the location, formerly occupied by Vie de France, last October.

MOD Pizza is a Seattle-based franchise founded in 2008. It opened its first Washington, D.C.-area store earlier this year in Silver Spring, part of fast growth that the company founders hope will be 100 stores by 2016. Another Northern Virginia store is planned for Gainesville. 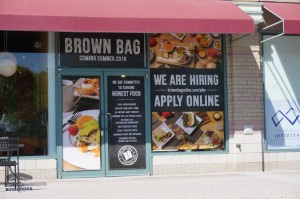 The restaurant is a fast-casual concept. Customers choose from a variety of speciality pizzas or create their own. The pizza is ready in about five minutes. Pizzas start at $7.47.

The usual toppings such as pepperoni, cheese and sausage are available, but so are hot buffalo sauce, siracha, feta and arugula.

Over at the other end of the plaza, Brown Bag is hiring for its new location at 11692 Plaza America. Brown Bag, a local fast-casual chainlet, signed a lease this winter for the space formerly occupied by Salaadworks, which closed last year.

Brown Bag started in Bethesda in 2002. It still has a location there, as well as franchises in Arlington and several stores in DC.

Brown Bag says on its website it takes pride in:

Brown Bag said in a press release its plans to open the Reston store “this summer.”