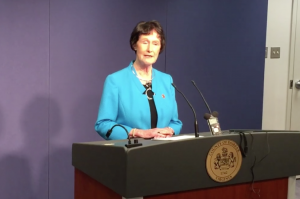 Express buses will be running from Reston to the Pentagon when Metro’s SafeTrack program gets underway early next month.

That’s just one means of mitigating aggravation, delays and traffic during Metro’s accelerated safety program that will condense three years of repairs into one year.

Metro will accomplish this by working nights, weekends, and in 15 “Safety Surges,” which will mean rolling, longterm track outages in various parts of the system.

Reston-area commuters will be affected early in the process. The Silver and Orange Lines will be single tracking from Ballston to East Falls Church June 4 to 16. Then from June 18 to July 3, the Silver/Orange/Blue lines will be closed from Eastern Market to Minnesota Ave/Benning Road in D.C.

Metro officials said Silver Line trains will run about every 18 minutes during the surge. They are also encouraging riders to seek alternate forms of transportation.

Fairfax County Supervisor Chair Sharon Bulova said on Tuesday, following a transportation committee board meeting, that the Board of Supervisors is “very supportive of the SafeTrack Plan.”

“We feel the time is more than over for WMATA to put in this kind of safety effort,” she said. “But it will not be easy and convenient for folks.”

The Pentagon bus service will cost $4 per trip. It will depart from the Reston North Park and Ride (11300 Sunset Hills Rd., opposite the Wiehle-Reston East Metro) every 30 minutes from 5:05 a.m. to 8:20 a.m. The one-way trip is expected to take 35 minutes.

Photo: Sharon Bulova, chair of the Fairfax County Board of Supervisors, after Tuesday’s transportation committee meeting.