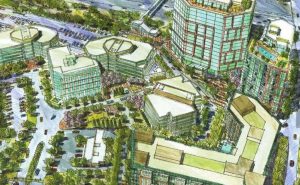 The first phase of an eventual 1.5-million square-foot mixed-use development on the south side of the Wiehle-Reston East Metro was recommended for approval by the Fairfax County Planning Commission on Thursday.

The planning commission held a public hearing last week but deferred decision until Oct. 6 to iron out some development conditions. While those issues — when a bike lane on Wiehle will be built, as well as expected contributions to the Reston Road Fund, among others — are not completely settled, Hunter Mill Commissioner Frank de le Fe says he is confident the parties will work together as the development plan comes together.

He also said developers will work with IGS LLC, the owner of a nearby office building. An IGS rep testified at the public hearing that the development would cause undue hardship and injury to IGS because of the office park’s private roads and infringement on that owner’s private property.

The developer plans a central plaza and promenade, as well as five park areas.

Vornado says the first building (if approved by the Fairfax County Board of Supervisors) has a target completion date of 2019.

The 22- and 24-story towers will be about the same height as One Reston Town Center, the approved plan for redeveloping a five-story office building into Reston’s tallest building at 1760 Reston Parkway.

Commerce Executive Park will be part of a massive transformation on the south side of the toll road.

The planning commission recommended for approval last week Lincoln Property Company’s plans to build 260 multifamily residences on what is now a parking lot at Sunrise Valley, Commerce Park and Association drives, adjacent to the Vornado project.

On Wednesday, the planning commission also recommended for approval Pulte Homes’ plans for 44 residential units on Michael Faraday Drive, about one-third of a mile from Wiehle-Reston East.

Earlier this month, the planning commission approved rezoning an office building for 54 townhouses and began demolition of the 42-year-old former American Press Institute building. Both of those projects are on Sunrise Valley south of the Dulles Toll Road.

The second phase of JBG’s Reston Heights is also under construction, with a 385-unit apartment community and as well as 89,000 square feet of retail.