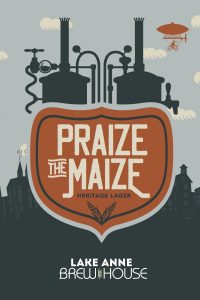 Local nanobrewery Lake Anne Brew House is partnering with beer historians to offer the frosty mugs of our ancestors.

Praize the Maize, which will be tapped Thursday evening at the pub (11424 Washington Plaza West), has been brewed using the 1912 recipe of a German immigrant brewer — with ingredients that have been sourced from the locations called for in the recipe as well.

“We’re just really excited about it,” said Melissa Romano, the brew house’s co-owner. “We’re going to be doing a whole series of these recipes over the coming year — or years, who knows?”

The Heritage Lager series is a partnership between Lake Anne Brew House and Lost Lagers, the team of beer historians Michael Stein and Peter Jones, whose mission is to recreate the beers of days gone by.

“[They were] able to take this recipe, translate it into English, and then we were able to work on sourcing period-accurate ingredients,” Romano said. According to information provided by Lost Lagers, that involved tracking down appropriate hops from New York and California.

Romano said the recipe for Praize the Maize, as well as the other beers that will be brewed as the series continues, came from the notebooks of a brewer who arrived in the U.S. around the turn of the 20th century. A distant relative of the brewer is a friend of Romano and has done graphic design work for the brewpub. The recipe books, family heirlooms, have been loaned to the brew house for the project.

According to Lost Lagers’ research, Praize the Maize was likely — in its past life — a beer called Erlanger Light by Philadelphia’s Weger Brothers Brewery. Romano said it is “light” and “fresh,” with “a little bit of sweetness” and “some nice herbal qualities.”

“I think [customers] are going to really like it,” Romano said. “I think it’s going to be a very approachable and easy-drinking beer.”

The beer will be tapped and ready for consumption at 7 p.m. Thursday. Stein and Jones from Lost Lagers will be present, along with the family that provided the recipes, to answer any questions from visitors and to discuss the process.

“It’s a really unique recipe,” Romano said. “It’s just going to be kind of a cool thing, I think.”