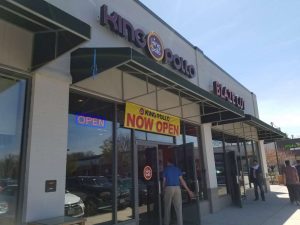 If you’ve visited the Hunters Woods Village Center recently, you may have noticed some new signs accompanied by delicious smells.

King Pollo opened recently at 2254-G Hunters Woods Plaza, between Elysium Nail & Spa and Blaze Cut. The space is the former home of Solar Plant Tanning Salon, which closed in 2014.

The restaurant, which offers Peruvian chicken and other Latin cuisine, began work on the location last year.

The chain operates five other locations in the region, including in Chantilly and Sterling. The restaurant is open at 10 a.m. every day. Catering options are also available.

More Stories
Pet of the Week: DaisyBike, Pedestrian Safety on Glade Drive To Be Topic of County DOT Public Meeting