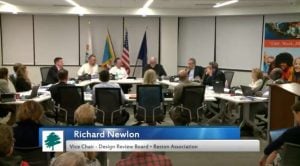 Speaking to representatives for developer Bozzuto during an informational session Tuesday night, the vice chair of Reston’s Design Review Board expressed deep concern about the future of the community.

“It’s imperative as we get new developments that they respect the Reston quality, and not allow us to become simply another suburban development,” Richard Newlon said. “Internal overdevelopment will destroy Reston.”

Newlon, who has served on the DRB for 18 years, said roughly 10 percent of the 134 clusters in Reston are owned by developers such as Bozzuto, JBG and Lerner. He said the St. Johns Wood project is a “precedent-producing application.”

“One of my concerns is if all of those 13 or so clusters do the same thing, Reston as Reston exists today is gone,” he said. “Reston as we know it would cease to exist.”

Members of Reclaim Reston also spoke during the session, presenting similar information to what they did at a Monday night session with the Planning & Zoning Committee. Members of the DRB agreed with much of what the affected parties shared, including about the apparent lack of context-sensitive design within the proposal.

“Contextualism is a term that suggests an architecture that responds to its surroundings by respecting what’s already there, and I think we have a problem here because I don’t think that’s happening,” Newlon said. “I think you guys [Bozzuto] are going to really have to look at the design and do what you can, both from a massing standpoint and, as we get to it, an architectural standpoint.”

DRB member Neal Roseberry said the potential of having such an imposing development go up in a residential neighborhood is frightening.

“How do you insert this relatively high-density anomaly into an existing setting, an existing neighborhood that doesn’t have anything like this at all, and [the development] obviously scares people?” he said. “It’s literally scary to think of this thing landing in that neighborhood up there.” 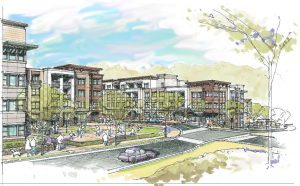 Brian Winterhalter of Cooley LLP, the commercial real-estate attorney representing Bozzuto, said his team would follow up about scheduling a work session with the Design Review Board. However, he expressed disappointment with how the process is progressing.

“You have approved a plan [in July], we came back with a revised plan. You had very specific comments about the revised plan, which we feel we have addressed very well based on what you gave us, and now we’re back two steps backward,” Winterhalter said. “And so I don’t know what we make of that going forward in terms of the comments we just received.”

Newlon said the plan that was approved in July was a different plan that the board felt was “going in the right direction.”

“This is a whole new project, as far as I’m concerned,” he said. “It’s doing, in my mind, all the things we were hoping wouldn’t happen.”

Fairfax County Supervisor Cathy Hudgins has a community meeting on the proposal slated for next Tuesday at Langston Hughes Middle School. The proposal is set to go before the Planning & Zoning Committee and the Design Review Board again next month, on May 15 and 16. A Fairfax County Planning Commission hearing on the project remains scheduled for May 25.