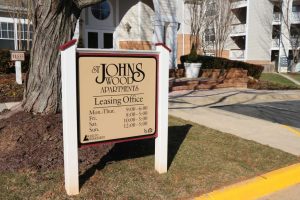 Hudgins’ office says the community meeting on the project that had been scheduled for Tuesday is being canceled, and a representative for the supervisor said it is her understanding that “all meetings” regarding the proposal are off the table.

The plan was scheduled to go before the Fairfax County Planning Commission on May 25, following additional meetings with Reston’s Planning & Zoning Committee and Design Review Board on May 15 and 16. Meetings with the P&Z Committee and DRB this week featured many comments against the project from North Point residents, and the DRB in particular was critical of many elements of the project.

Brian Winterhalter of Cooley LLP, the commercial real-estate attorney representing Bozzuto, said at Tuesday’s DRB meeting that his team would follow up about scheduling a work session with the Design Review Board. However, he expressed disappointment with how the process was progressing.

The proposal has been in the works since 2014 and has seen numerous changes in that time. The current plan calls for 481 multifamily units within two buildings on the 14.3-acre property.