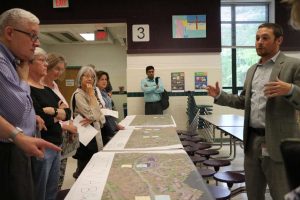 Following a community meeting last month regarding the potential addition of bike lanes to Glade Drive, the Fairfax County Department of Transportation has decided not to go forward with that possibility.

“We obviously heard from the community along Glade about their preference for parking, and that helped to drive our decision,” said Adam Lind, FCDOT’s Bike Program manager, Friday morning. “We’re not going to take any parking; we’re sticking with just sharrows.”

A shared-lane marking, or sharrow, is painted in a travel lane to show where bicycles may be on the road and what direction they should be traveling. Lanes remain the same width, as does space for cars to park.

Some residents had expressed concern that if bike lanes were added to Glade Drive, the subsequent removal of street parking would cause problems with overflow parking at Glade Pool, Walker Nature Center, the Quartermaster Soccer Field and other locations along the road.

In another community meeting in March, Lind presented possibilities for bike lanes on Colts Neck Road, North Shore Drive and Twin Branches Road. In regard to those plans, Lind said: 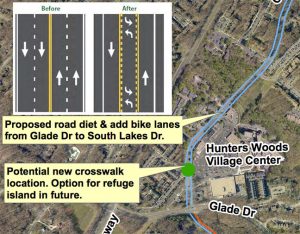 “No major alterations [from what was presented],” Lind said. “Most of the tweaks have been local comments about specific items — [such as] where we’re looking to shift the double yellow to give more room for people to pass when there’s parking along a road.”

At March’s meeting, a number of residents were particularly concerned about the proposal for the road diet on Colts Neck Road, which will take the road from four lanes of vehicle traffic to two between Glade Drive and South Lakes Drive.

Bicycle riders responded by saying Colts Neck Road is particularly dangerous for them and for pedestrians as well. The road diet could also allow for the addition of a crosswalk. Lind also said it is not believed the diet will have a major adverse effect on vehicle traffic. In a presentation during the March meeting, Lind said roads with traffic less than 20,000 cars per day don’t require four travel lanes, and a traffic count showed less than half that on Colts Neck Road. Those cars will be slowed by the diet and safety will be increased, Lind said.

Residents argued, however, that the road is a major “cut-through” during rush-hour times when traffic is backed up on Fairfax County Parkway, and that the road diet would cause additional traffic delays specifically during those times. According to a recent study, less than 1/2 of 1 percent of Fairfax County commuters bike to work — an amount some residents said is not worth potentially causing daily bottlenecking of cars. Possible safety hazards that could be presented by a center left-turn lane were also raised by citizens.

Repaving and re-striping will be conducted by the Virginia Department of Transportation after school lets out for the summer, Lind said. Further details will be provided on VDOT’s paving program website.

Anyone seeking additional information can request it by emailing [email protected].

Let us know what you think below: