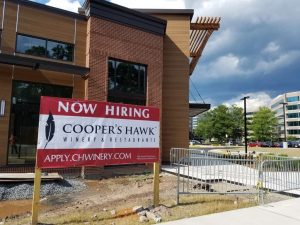 That big new building at 12130 Sunset Hills Road? It’s Cooper’s Hawk Winery and Restaurant, and it has announced an Aug. 28 opening date.

Before that date, though, the restaurant is looking to hire more than 200 people. Its first hiring fair is set for Wednesday, from 8 a.m. to 6 p.m. at its temporary hiring office, 12100 Sunset Hills Road Suite 130.

“Positions range from servers to line cooks, bartenders to wine tasting room attendants,” according to a press release. “Just about every job needed to run an upscale winery and restaurant needs to be filled.”

Additional hiring events are scheduled for July 11-12 and July 25-26, from 8 a.m. to 6 p.m. each day. Cooper’s Hawk will be conducting open interviews with applicants on the spot, according to the release, as it aims to fill 202 positions.

According to founder and CEO Tim McEnery in the press release:

“We are currently looking to staff team members who have a passion for wine, food and first-class hospitality and look forward to meeting and working with many great members of the community. We are offering our staff a highly competitive pay rate, for example line cooks will be paid at $15 per hour and hosts at $12 per hour.”

Candidates who wish to apply but who are unable to attend a hiring fair are invited to do so online at apply.chwinery.com, or check out @CareersatCH on Twitter and Instagram.

Cooper’s Hawk will be the anchor of the RTC West restaurant and retail complex. Other restaurants expected for the site include Nando’s Peri-Peri, Mezeh Mediterranean Grill and BGR The Burger Joint.

This will be the 30th Cooper’s Hawk location nationwide. There are two others in Virginia, in Ashburn and Richmond.