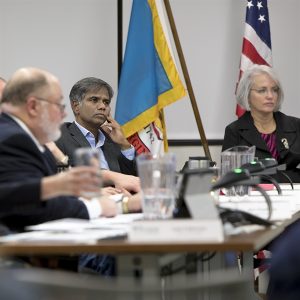 (This article was updated at 1:15 p.m. after Ganesan confirmed to Reston Now that he is stepping down from his role as Reston Citizens Association president.)

Eschewing recent precedent, the Reston Association Board of Directors decided Thursday evening to directly appoint a replacement to a vacant At-Large seat.

Sridhar Ganesan, who had been named the Board’s treasurer last month, was selected to fill the seat vacated by Eve Thompson earlier this month. Ganesan will occupy the position until next spring, at which time the final year of the term will be voted upon by members in the Board election.

In at least the last three instances when a seat was vacated mid-term, a call for candidates was posted and members of the community were able to put their hats in the ring. Ray Wedell, At-Large director, presented to the board that they should choose between Ganesan and Ven Iyer, who finished a close runner-up to Eric Carr in the most recent At-Large election. He said Ganesan and Iyer were clearly the top two candidates and that opening it up to the community would only create the opportunity for more controversy.

“The idea that we have some great candidate out there and there’s an open competition — it’s not. It’s a way to bring somebody who could a good resume writer, a good interviewer, who knows somebody else on the board, to slip in without running for the office,” Wedell said. “This [would be] potentially opening it up to some charges of cronyism and everything else. We don’t need that.”

Not everyone agreed with Wedell’s assessment. John Mooney, North Point District director, said consistency with recent past practice should be followed by the Board.

“It’s unlikely that people would come forward who would be a surprise, but it is possible,” Mooney said. “I don’t believe that as we strive for openness and asking the community to participate that we should foreclose that possibility.”

President Sherri Hebert said that as the Board is in the middle of crafting its biennial budget, filling the position as quickly as possible was preferable.

“We’re telling you what we want to do and why we want to do it, and that’s about as open and transparent [as we can be],” she said. “Whether people in the community agree or disagree, that’s always going to be [the case].”

Julie Bitzer, South Lakes District director, pointed out that the Board has no budget sessions planned between now and their July meeting.

“Bringing someone on tonight [as opposed to waiting until July] would make basically no difference in our ability to move forward with our budget and our discussions,” she said.

Hebert responded by saying there is budget work going on “behind the scenes,” and she believes there “could be a gap” if the Board continued for a month or two with a vacant seat.

A motion to put Ganesan and Iyer up for an immediate vote to fill the seat carried by a narrow 4-3 margin. Hebert, Wedell, Carr and David Bobzien voted for it; Mooney, Bitzer and Victoria White voted against it. (At-Large Director Michael Sanio was not present at the meeting.)

Ganesan was then elected to the Board by a vote of 6-1, with Wedell casting the lone vote for Iyer. In addition to his work with the Board, Ganesan is also a chief financial officer with over 20 years of experience in media, technology, satellite and telecom sectors. He also led Mediaworld Ventures LLC in its efforts to review the Lake House purchase.

He was the president of the Reston Citizens Association; however, he told Reston Now on Friday morning that he has withdrawn from that role.

“A new RCA board will sit next week on June 26, 2017 and it is the right time to step away and given RA’s budget cycle, I plan to focus on my role as Treasurer and At-Large Director. This morning, I have withdrawn myself from the North Point district seat on RCA’s new board and there will be a new president for RCA on Monday.”

The RA Board’s discussion of the appointment can be viewed on the Reston Association YouTube channel.