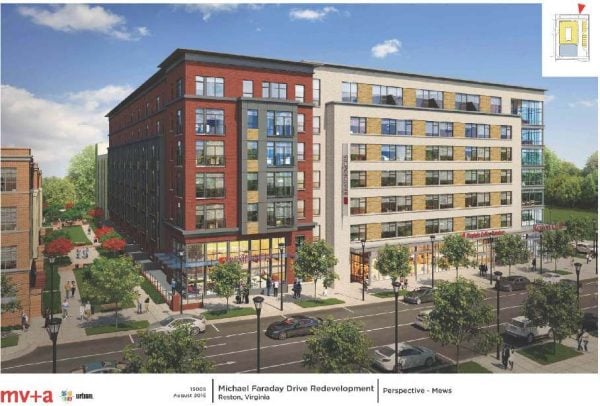 After being deferred five times, the redevelopment of property at 1831 Michael Faraday Drive will have a public hearing Thursday in front of the Fairfax County Planning Commission.

The plans for the 3.85-acre property include 13 single-family attached and 283 multi-family dwelling units, along with 7,500 to 10,000 square feet of ground-floor commercial uses. According to the project’s specifications:

The proposal also calls for 22 percent open space. This would include a linear open space, or mews, which would be located between the single-family attached units and the multi-family units. The mews would feature a patio, seating, game tables, lawn and sidewalks. 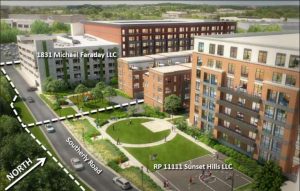 The adjacent 11111 Sunset Hills Road property, which is also up for rezoning, would have mirrored townhouses and courtyards. In addition, it would include an extension of the open space at the southeast corner of the Michael Faraday site to create a “more extensive and coordinated park” on the southern portion of the properties. That site has a Planning Commission hearing scheduled for Nov. 16.

The site is owned by Rooney Properties, who hopes to begin construction on the mixed-use project in the first half of 2018. The hearing with the county Planning Commission was first set for October 2016 and has been rescheduled four more times before Thursday.

more stories
Previous
Reston Resident Scores High on ‘Jeopardy!’ But Gets Stumped at the End
Next
Thursday Morning Notes