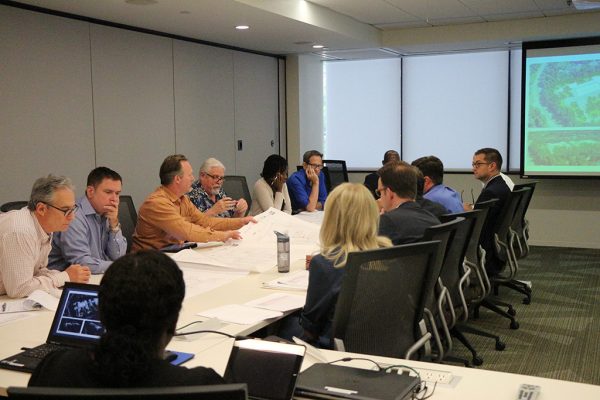 Representatives of Bozzuto Group again brought a presentation about redevelopment of St. Johns Wood to Reston’s Design Review Board during a work session Tuesday.

Tuesday’s one-hour session was the latest in a long series of meetings about the proposed redevelopment of the North Reston residential community. After the project was deferred in April, the redevelopers brought new sketches to the DRB as they continue to work toward adding dwelling units to the property.

The previous proposal that had been brought for consideration featured featured 481 multifamily units within two buildings on the 14.3-acre North Point property. Two options presented by architectural firm KTGY at Tuesday’s session reconfigured the buildings and brought the number of units down to 441 or 454.

One option features a street between the two buildings, while the other has a central tree grove.

After the 20-minute presentation, members of the DRB panel shared their thoughts. The massing of the project remained a major hangup for the group, as it was in April and before. Members of the DRB asked if there is any way the developers can lower their threshold for the number of units they need on the property.

“You might have chopped off a unit here or a unit there, but these are still 450-whatever-plus units,” said Richard Newlon, DRB vice chair. “If we’re going to get anywhere with this, we have to talk turkey here and say ‘Where’s your cutoff point?’ If 450 is absolutely the smallest you can make it and still make a profit out of this project, then we’ve got a real problem.”

Some members of the panel said they would be more comfortable with the proposal if the developers would consider breaking the massing into several smaller buildings, such as what is currently on the property. Rohit Anand, of KTGY, said that may not be feasible, considering the use of parking structures in the property plan.

“People want parking in proximity to their home, and these schemes provide that,” Anand said, adding that creating smaller parking garages for each unit is also not desirable.

Brian Winterhalter, of Cooley LLP, representing Bozzuto, asked the panel if they could make a determination on what is more important to address — the height of the buildings or the overall footprint.

“It seemed like your concern was that you would prefer it to have less footprint,” Winterhalter said. “There’s only so much we can do in terms of narrowing the footprint and reducing the height at the same time.”

In response, DRB members said the concern was more about scale and overall size, not specifically about height or footprint. Winterhalter later said if some specific parameters of acceptability could be provided by DRB, the developer could begin moving in that direction.

Ken Kneuven, DRB lay member, said someone will have to break before an agreement can ever happen.

The work session was recorded and will be made available on Reston Association’s YouTube channel this week.