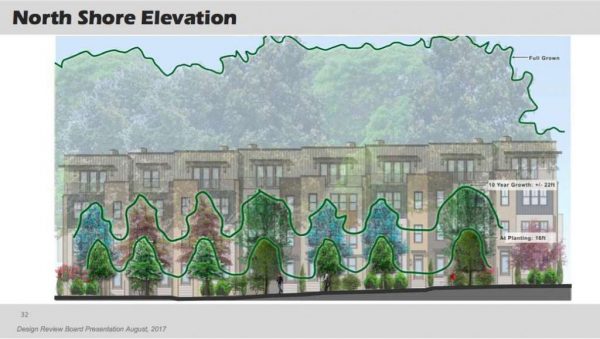 The goal is to keep the tall oaks in Tall Oaks.

That’s what representatives of developer Jefferson Apartment Group and architects from KTGY told Reston’s Design Review Board during their meeting Tuesday (video). JAG is working toward ironing out the details of the future redevelopment of Tall Oaks Village Center, approved by the county last year.

At a meeting between the parties in July, members of the Design Review Board told the applicants about their concern regarding how the new development — which will include multifamily residential buildings, two-over-two condominiums and townhouses for a total of 156 residential units — would look from Wiehle Avenue. This month, the developers said they listened.

“There obviously are some constraints, so we’re being more surgical in how we place our trees in order to get the desired look,” said Mike Medick of KTGY. 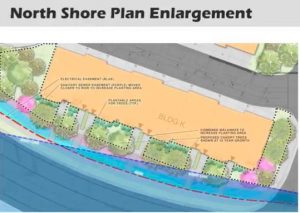 In order to preserve the sight line from the North Shore Drive/Wiehle Avenue intersection to the southwest corner of the site, Medick said architects have moved entrance walkways and pushed them closer together to allow for the planting of seven large canopy trees. Medick said those will include red, white and pin oak trees.

At planting, the trees will be 16 feet tall. In a decade, they will be about 22 feet tall — reaching the third floor of the townhomes behind them. When they are fully grown, Medick said, they will fully conceal the development from the intersection.

“We’re comfortable that given this planting scheme … we can still get this natural feel for the frontage of North Shore [Drive],” Medick said. “[This will] emphasize again that theme that is so important here, the namesake of the project, the tall oaks.”

Grace Peters, land planner and landscape architect member of the DRB, said she would like to see more down elsewhere on the property to increase tree cover.

“I would appreciate it if the applicant could look into providing additional landscaping where possible [and] save more trees as much as they can,” Peters said. 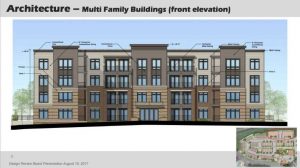 The developers also responded to comments provided by the DRB last month regarding architectural elements of the buildings themselves and the design of site amenities. The changes were met with mostly positive comments from the DRB, with continued comments about small details.

“We’re faced now in Reston with jumping away from the ’60s, ’70s and ’80s architecturally, and I think this effectively does that,” said Richard Newlon, DRB vice chair. “I think you guys have come a long way. I’m relatively satisfied with these [buildings] at this point.”

The DRB voted to approve the general architecture plan as presented, with stipulations that the rooftop units on condominium units be screened, that the application return with material and color palettes for final approval, and that the other comments presented during Tuesday’s meeting be considered as well.

The DRB also voted to approve the landscape plan, with a comment asking the developers to intensify landscaping along North Shore Drive, as well as in the middle and along the northern edge of the property, if at all possible.