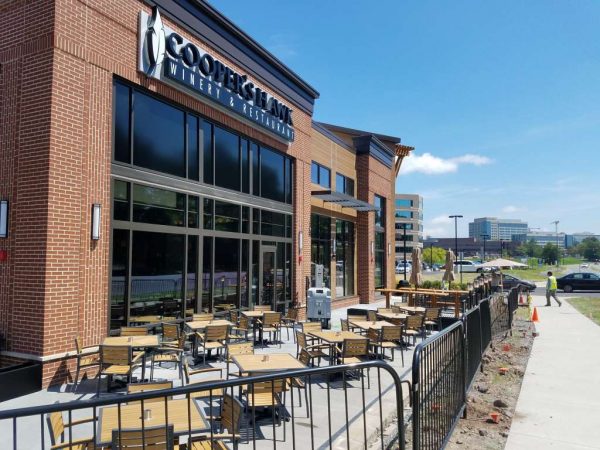 Cooper’s Hawk Winery and Restaurant will open its new Reston location in 10 days.

A permit to operate the eating establishment at 12130 Sunset Hills Road, in the RTC West commercial development, was issued by Fairfax County this week. Signage outside the front door of the restaurant advertises its Aug. 28 opening, as previously announced.

The 9,365-square-foot restaurant also features a 522-square-foot mezzanine area. It will feature “a lively tasting room and market, indoor dining for 196 guests, outdoor dining for seating for 146, and a private event space that can accommodate up to 44,” according to a press release issued this week by the restaurant. The Reston location — its third in the DC Metro area — will be led by general manager Ryan Delisi and chef Laurence Cohen.

Also from the release:

The concept is built upon [CEO Tim] McEnery’s passionate core belief that food and wine hold the power to forge lasting connections. His restaurants are home to 250,000+ Wine Club members, who enjoy limited production Wines of the Month, travel and dining experiences among other benefits.

[Chef Laurence] Cohen works closely with corporate-based Executive Chef Matt McMillin to ensure the utmost in quality and presentation of the expansive contemporary American menu. Utilizing peak of season ingredients, the restaurant’s scratch kitchen selections include a carefully crafted array of food and wine pairings, each listed with a bin number to guide guests’ selections of their perfect wine match.

In addition, the restaurant’s wide selection from its winery is celebrated in the release:

The company, which imports grapes from the best vineyards across the globe to produce more than 40 varietals in its Countryside, Illinois winery, has been honored with more than 450 wine awards. Crafted to please a range of palates, Cooper’s Hawk wines include selections that are accessible for those new to the world of wine, as well as complex and full-bodied options for more seasoned drinkers. In addition to the wine menu, guests can choose from a selection of craft cocktails and sangrias made with Cooper’s Hawk wine. These include inventive takes on a classic Collins cocktail (Harvest Peach Collins made with Slaughter House Whiskey), a Caipirinha with Cooper’s Hawk Cabernet Sauvignon, as well as creative martinis such as a Blood Orange Paloma Martini (Casa Noble Tequila and Cooper’s Hawk Prosecco).

Earlier this summer, Cooper’s Hawk began the process of hiring more than 200 employees for the restaurant. Training of those workers is currently underway.

Work also continues on other buildings in the plaza that will soon house six more restaurants, a nail salon and a Starbucks. The other restaurants on site will include Punjabi by Nature, The Black Squirrel, Honeygrow, BGR The Burger Joint, Mezza Mediterranean Grille and Nando’s Peri-Peri.

The restaurant and retail space is the first phase of development for the site, which is bordered by Town Center Parkway to the east, the W&OD Trail to the north, and the plaza that contains Chick-fil-A, Potbelly Sandwich Works, Chipotle and more to the west. Property owner JBG announced last year that it has further plans for the site, including two multifamily residential buildings and three more office buildings.