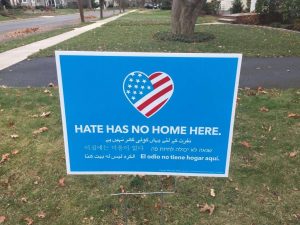 A 12 inch-by-12 inch sign reading that “Hate Has No Home Here” can stay in the Orchard Green Cluster, Reston’s Design Review Board says, despite the cluster president’s stance that it should be removed for its political nature.

During their meeting Tuesday (video), the DRB rejected an appeal of an August ruling by a three-member panel that the sign is OK for display as long as it is no bigger than one square foot. That came after the Orchard Green Cluster board had asked for a 2 foot-by-3 foot sign displaying the message to be removed.

Tuesday night, Orchard Green Cluster President Dan Pennington told the full DRB that the ruling should not have been made based on the sign’s size, but rather on the political nature of its message. According to Reston Association’s rules for small yard signs, temporary political signs up to 2 feet by 3 feet are allowed to be displayed, but must be removed “no later than one week after announcement of election results.” Orchard Green Cluster’s board voted on the sign, displayed in the yard of resident Rikki Epstein, at their June meeting and “voted to request its removal under the general RA Signs rules.”

“Fundamentally, what you’ve done for our cluster is establish a design guideline that anybody can put up a 12-by-12 [sign], regardless of content [and] regardless of quantity, [with] no limitation and no content issues,” Pennington said to the DRB said. “It’s an untenable standard going forward for our cluster. … I would say it’s a misreading of the rule.”

Pennington suggested that if this sign is allowed to remain indefinitely, another resident could put up numerous one-square-foot signs reading “Trump is President: Get Over It” with each sign displaying only one letter of the message.

“Do you have a limiting principle?” Pennington asked the DRB. “This is a political sign and it should have been adjudicated under the political-sign standard and not the 12-by-12 standard.”

DRB members, along with their legal counsel Wil Washington, said there was no misreading of the rule when the panel informed Epstein she could display a 12- by 12-inch version of the sign, as the size rule overrides the political rule. They also said Pennington’s example of numerous signs with one letter each was hyperbolic, as the rules refer to “the sign” in the singular form.

“The content [of the sign] is irrelevant — the regulations say what they say,” said Nick Georgas, landscape architect member of the DRB. “I don’t think it’s this board’s job to determine what the content of that one-square-foot sign is.”

Pennington said his cluster board is working to pass its own rule that signs of any kind not be allowed, except for home-security signs and “other minor exceptions.”

“We simply don’t want signs in our cluster,” Pennington said.

END_OF_DOCUMENT_TOKEN_TO_BE_REPLACED

More Stories
Presentation Tonight Will Explore How Reston Was CreatedPet of the Week: Rose