Restonians once again face the threat of a massive change in one of its key zoning ordinances — the Reston PRC (Planned Residential Community) — on the basis of knowingly faulty arithmetic. You need to understand what that is.

That seems to be just 18,738 added people. What could be wrong with that? Certainly we can manage the impact of about 9,000 more homes (“dwelling units” — DUs — in planning parlance), all in multi-family “elevator” apartments and condos with households averaging 2.1 people.

First, the County provided a clue to its funny counting in a footnote in its several presentations to the community (p. 14) on the proposed Reston PRC zoning change. With a small asterisk after the column on Reston’s current and approved DUs, it states that this total “(e)xcludes affordable housing bonus units per Z.O.” What? Bonus dwelling units for providing affordable housing may be as high as 20 percent for meeting the one-for-one bonus arrangement ranging from 12 percent to 20 percent. So add up to 20 percent to Reston’s population potential. 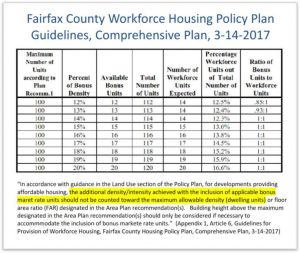 Second, an obscure passage in the PRC zoning ordinance discloses that the affordable housing itself does not count toward the population “cap” according to the PRC zoning ordinance (Article 6-308) and the County’s housing policy plan. The last paragraph on “maximum density” in the PRC ordinance ends with this: “(The preceding restrictions on density) shall not apply to affordable and market rate dwelling units which comprise the increased density pursuant to Part 8 of Article 2 (which sets standards for the Affordable Dwelling Unit Program) …” We welcome the housing diversity, but we think the people living in that 12.5 percent to 20 percent workforce housing should count and the infrastructure and amenities required for them should be in the County’s plans. That’s another potential 20 percent added to our total population.

Between not counting workforce dwelling units and the bonus density they allow, the nominal 99,933 population cap under the County’s proposed 16 persons per acre in the Reston PRC potentially becomes 139,906 souls in the Reston PRC district, a nearly 40,000-person increase over the nominal cap and nearly 80,000 more people than live in all Reston now.

And then, third, there is the elephant in the room: The County’s current discussion about the Reston PRC change has excluded any reference to the Reston Master Plan’s potential development of 44,000 DUs in Reston’s transit station areas (Figure 35, p. 103), most of which is outside the PRC-zoned area. Based on a County count of existing, approved and planned PRC development in RTC (13,772 DUs — not counting affordable and bonus units?) detailed in Reston Now two weeks ago, we can assume as many as 20,000 DUs may be built in the PRC portion of Town Center over the next 40 years. That leaves 24,000 DUs — about 50,000 people — to be added elsewhere in Reston’s station areas. So add another 50,000 people to Reston’s population — not counting the workforce housing and bonus development that goes with it.

Fourth and finally, on the other side of this potential growth calculation is an examination of the impact the plan would have on Reston. The Reston Master Plan (p. 102) states, “The impact analysis (for the target development under the new Reston Master Plan) assessed approximately 80 percent of the maximum zoning potential as the level of development that is likely to be realized over the planning horizon.” So, to the extent that the County has done an impact analysis on Reston (PRC and non-PRC) based on the Reston Master Plan — streets, schools, parks, environment, police, fire and rescue, and much more, it has done so on four-fifths of the potential development permitted in the PRC under a 16 persons per acre cap. That’s an impact analysis on a population of four-fifths of 99,933 or 79,946 people.

Wait a minute! That 79,946 people is fewer people than our current population cap of 81,195 at 13 persons per acre! The plan language indicates this is “the level of development that is likely to be realized,” so why do we need to add more population cap “head room?”

Between the prospective raising of the population cap in Reston’s PRC area and the addition of some 50,000 people (plus affordable housing and bonuses) in the station areas not covered under the PRC zoning ordinance, Reston faces the prospect of tripling of its population to about 170,000-190,000 people if the allowable development is completed. At the same time, the County has neither identified nor planned for infrastructure needs to support even half that number of Restonians.

Infrastructure implementation is an absolute void in the County’s planning for Reston. And all signs, including the shortage of concrete, funded proposals, indicate the County has no intention of expanding its infrastructure and amenities commitment to sustain, much less enhance, the quality of life in Reston at any level of increased population density.

This is a crisis in preserving Reston as a well-planned community consistent with Bob Simon’s vision a half-century ago.  If we need to raise the population cap — and that’s a very big “if,” — we need to do so in a manner that assures that the infrastructure and amenities needed to meet County guidelines and community expectations are there as well. The County hasn’t even offered a hint as to how, when, where this might be accomplished nor who will pay for it.

Moreover, the County has been less than forthcoming with information about any of this. Its zoning amendment change presentations have not mentioned that affordable housing units don’t count toward the proposed cap. It hasn’t breathed a word about the tens of thousands of dwellings that will be built in the transit station areas. Its disclosure that market rate bonus dwelling units don’t count is buried in a footnote in its presentation. Efforts to obtain further information about these and related topics have been met by virtual silence from County staff — or huge bills for Freedom of Information Act responses. For a change, it would be at least useful for the County to be honest and transparent about the impact of what it is proposing.

Please come to Supervisor Hudgins’ fourth community meeting on this topic this evening (Monday, Sept. 25) at 7 p.m. at Lake Anne Elementary School wearing your bright yellow-ish T-shirt (ala Rescue Reston and Reclaim Reston) and carrying a red card — and maybe a green one too — to express your silent disapproval of what you are being told (again). Listen, comment, question and challenge what you hear. We need to protect the Reston we have built over five decades and build a better, livable, more urban Reston not driven exclusively by the excesses of developer greed or County financial bungling.