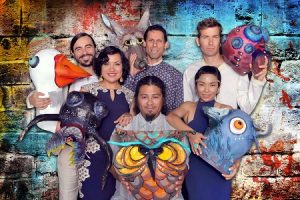 According to a description provided on the band’s website:

Quetzal is the collaborative project of Quetzal Flores (guitar), Martha González (lead vocals, percussion), Tylana Enomoto (violin), Juan Pérez (bass), Peter Jacobson (cello), and Alberto Lopez (percussion). The musical ensemble is influenced by an East L.A. rock soundscape composed of Mexican ranchera, cumbia, salsa, rock, R&B, folk and fusions of international musics, and also one whose political vision is based in social activism, feminism and the belief that there is radical potential in expressive culture. During the past two decades, the musical force of Quetzal has created a unique cultural platform that has sounded against conditions of oppression and marginalization. On the 20th anniversary of their first flight, Quetzal introduces us to another sphere of being, one that challenges us to reimagine human life in relation to the other forms of life that we are so often connected to and through.

Tickets for the show, scheduled for 3 p.m. Sunday, are $20 for Reston residents and $30 for non-residents. The show will take place at CenterStage (2310 Colts Neck Road).

The show is also in celebration of Hispanic American Heritage Month, according to information provided by RCC.

“This series brings you musicians from Guinea and Ukraine, bands from Los Angeles and Chicago, the political climate of American’s National Parks and the climate change of Jurassic Park, not to mention a secret octopus,” said Paul Douglas Michnewicz, RCC’s director of arts and events. “The arts are a signature element of what makes Reston such a great place to be. We invite you to share these indelible experiences and see why art and community intertwine so beautifully in Reston.”