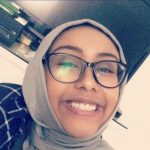 The man police say murdered Nabra Hassanen in June will face charges of capital murder and rape, the Associated Press reports. According to the AP, the grand jury ruling against 22-year-old Darwin Martinez-Torres in Fairfax County Circuit Court came down today.

A capital murder charge can be punishable by death. Virginia state code allows prosecutors to pursue a death penalty under certain conditions, including premeditated murder during a rape. The county’s prosecutor indicates that he will seek the death penalty in the case.

Hassanen was part of a large group of teenagers walking and biking on Dranesville Road at about 3:40 a.m. Sunday, June 18 after a Ramadan service at the All Dulles Area Muslim Society. The suspect allegedly approached the group in a car and argued with a teenage boy. The group scattered, but police say Martinez-Torres caught up a short time later armed with a baseball bat. Hassanen was struck and taken in the car. Her body was discovered later that day in a Sterling pond.

Days after Hassanen’s death, Fairfax County Police Chief Edwin Roessler said the possibility of sexual assault during the attack was being investigated. Monday’s grand jury ruling, however, is the first official indication that it is believed a rape was committed.

An Immigration and Customs Enforcement detainer was lodged against Martinez-Torres immediately following his arrest. The 22-year-old native of El Salvador was living in Sterling illegally. While rumors circulated that he is a member of the gang MS-13, FCPD has said there is “no credible information” pointing to that.

Police say Martinez-Torres committed the crime as part of an extreme case of road rage. Members of the community, including Hassanen’s friends and family, have suggested the crime was fueled by a bias against Muslims.

A vigil at Lake Anne Plaza in honor of Hassanen, just days after her death, drew thousands of mourners.

A preliminary hearing for Martinez-Torres last week was disrupted when Hassanen’s parents began shouting at the suspect and threatening him. The suspect ultimately waived his right to the hearing, allowing the case to proceed without further delay.