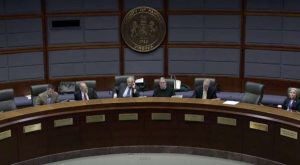 The Board of Supervisors appointed de la Fe in December 2001 and reappointed him two years later. He was named vice chairman in January 2013.

Commissioner de la Fe worked for the National Aeronautics and Space Administration in the 1960s. From 1969 to 1971, he helped create the Illinois State Bureau of the Budget. He then returned to Federal service to establish the Special Action Office for Drug Abuse Prevention. In 1974, he moved to the Justice Department’s Law Enforcement Assistance Administration. He completed his federal career in 1994 when he retired from the Office of Personnel Management.A long-time community activist, since moving to Reston in 1971, Commissioner de la Fe has served in a variety of leadership positions, including serving on the boards of the Reston Association and Reston Interfaith.

“Mr. Carter has lived in the Hunter Mill District for over 44 years and has extensive community involvement. I believe Mr. Carter is an excellent choice for this position,” Hudgins said.