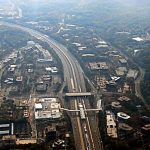 20. The rebranding of World of Beer brought in 7,498 page views. Signage was removed from Reston Town Center restaurant, ushering in a new full menu of American craft fare and drinks.

19. Paid parking at Reston Town Center continued to garner attention and fervor. A story about Jackson’s Mighty Fine Food and Lucky Lounge being granted a preliminary injunction against the ParkRTC system was a popular post with 7,433 page views.

18. An investigation about an attempted sexual assault near Tall Oaks also drew attention. Police said a man came out of the woods, approved a 22-year-old woman and attempted to remove her clothes. The article had 7,423 page views.

17. Wegmans’ announcement that it has signed a letter of intent to put an urban-format store near the future Reston Town Center Metro station gained 7,289 views. According to the Washington Business Journal, the store will be built in the future Reston Crescent development, a 36-acre plot of land in the northwest corner of the intersection of Reston Parkway and Sunrise Valley Drive.

16. Continuing the theme of things coming and going in the area, the closure of the Kmart on Elden Street in Herndon was a popular post with 7,214 page views. The 84,000-square foot store was purchased in August by Florida-based real estate-investment firm Sterling Organization at a cost of $7 million.