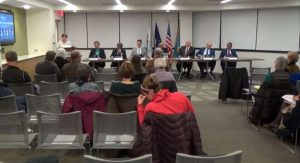 Candidates for an at-large seat on Reston Association’s Board of Directors called for tighter fiscal controls and better community engagement at a forum Monday night.

All seven candidates running for the three-year position struck similar positions on financial stewardship and balancing current facilities and programs with future programs as Reston’s braces for major population growth.

Sridhar Ganesan, former president of the Reston Citizens Association, drew from his experience as a current treasurer and director on the board, touting accomplishments like lowering assessments this fiscal year and leading the establishment of internal controls.

He hopes to reduce legal costs and employee costs while engaging in an “honest discussion” of services and programs the community desires. “I want to finish what I started eight months ago,” he said.

In contrast, Ven Iyer, president of a small technology business who took a hardline stance at the forum, said the board was operating in a “dogmatic mode” and needed to eliminate wasteful spending.

He said he wants to be the “voice to the families of Reston” by stopping wasteful spending, unwanted increases in assessment bills and invasive development projects. Among other examples, he criticized RA for decisions like a $100,000 website redesign that he said provided a “terrible user experience.”

Aaron Webb, who previously served as president of the Lakeside Cluster board and often cited his commitment to Reston’s core principles, said he wants to find ways to ensure development and amenities are available at the same pace. “Let’s not get the people here first and then get the venue,” he said.

Similarly, Travis Johnson, who touted nearly 20 years of experience in the public and private sector, said RA cannot “make investments randomly. “Every project that the board approves should have a clear middle and end,” he said.

Part of the challenge is staving off the “external greed of developers,” said John Pinkman, who has lived in Reston for 40 years and co-founded Rescue Reston, a grassroots organization. He hopes to protect and enhance property values, with the ultimate aim of uniting the “Reston spirit.”

“The bottom line really for me is that I really appreciate the $10 that we saved in our assessment, but I’m not sure i’m ready to sacrifice my home value to save that $10 a year,” he said.

Colin Meade, a sales executive who frequently reiterated his commitment to children’s programming and families, said RA must find ways to collect non-assessment dues. “I’m running for me and my family,” he said.

The all-male panel stressed the need to engage with people from diverse backgrounds and aggressively recruit more women to run for RA.

Watkins said RA can encourage inclusivity by becoming “more relevant in people’s lives,” noting there are “no institutional hurdles” to run for election.

“We just need to get people interested in it,” Watkins said.

Iyer, one of three non-white candidates on the panel, said encouraging more grassroots candidates like himself to run will encourage minorities to run. If candidates run on slates and are openly supported by the current board — which is the case with four candidates — people may believe there is a “revolving door of candidates.”

Johnson and Ganesan are running alongside Tammi Petrine and John Bowman, who are seeking other board seats. Candidates on the slate said they chose to run together because of their shared ideas, including concerns about the Tetra purchase. They also oppose a controversial proposal to increase Reston’s population density.

In contrast, Iyer said the board was operating in “group think mode.” In the past year, the board failed to pass one motion and more than 120 decisions were passed unanimously, he said.

Candidates also focused on RA’s $2.65 million purchase of the Tetra property and cost overruns linked to the building’s renovation.

When asked if it was time to move forward after the controversial purchase 2015, Ganesan and Iyer said changes were not implemented thoroughly enough to give closure, including a third party review of the purchase by StoneTurn.

Others like Johnson and Meade, however, said it was time to move on.

“We can’t complaining about what happened before… we own it,” Johnson said, adding the purchase was “emblematic of mismanagement of RA.”

Candidates also touted the need to increase the influence of the board on the Hunter Mill District Supervisor, the Fairfax County Board of Supervisors and the county’s park authority. RA’s board and the county have clashed in recent years.

The real power to enact change, Webb said lies at “the ballot box.”

Tonight, candidates running for an at-large seat for a one-year term and the South Lakes District seat will square off a second forum. The event will be streamed live on YouTube here and here.