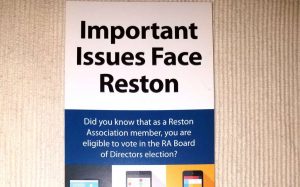 Voting for Reston Association’s elections begins today, launching a month-long voting period that would dramatically alter the nine-board Board of Directors.

A total of thirteen candidates are vying for four open board seats. Paper ballots will be mailed today and online voting will open at 5 p.m. on RA’s website.

All votes must be cast by April 2. Results will be announced on April 10 at 7 p.m. during RA’s annual members’ meeting at 12001 Sunrise Valley Drive.

This year, four candidates — Travis Johnson, Sridhar Ganesan, Tammi Petrine and John Bowman — are running on a slate, a choice they said was driven by shared positions on the Tetra purchase and a plan to increase Reston’s population density.

In mailing distributions, four other candidates — Colin Meade, Aaron Webb, Andy Sigle and current South Lakes District Director Julie Bitzer — are running as the “Alliance for a Better Reston.” In mailing distributions, they say they are committed to “implement[ing] Bob Simon’s original vision” for the community.” The alliance’s endorsements include Eve and Rick Thompson, Cheryl Terio-Simon, Bill and Betsy Keefe and others.

A breakdown of candidates with links to their profile statements is below.

At-Large Candidates (One seat for a one-year term)

South Lakes District Candidates (One seat for a three-year term)