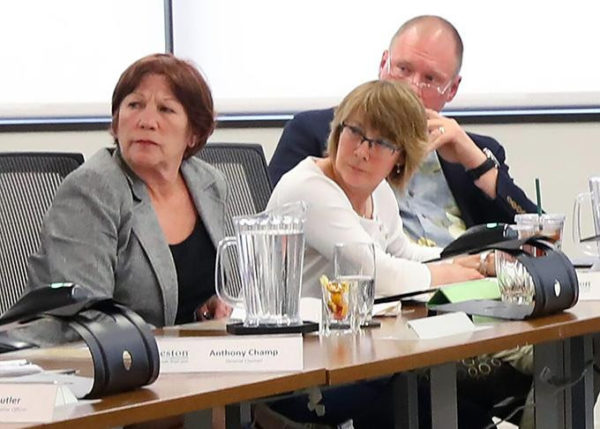 After several failed attempts to appoint a new board member, Reston Association’s Board of Directors appointed Caren Anton, chairwoman of RA’s elections committee, to serve as the Hunters Woods/Dogwood District Director through April 2019

The board was tasked with appointing a new director from a pool of four candidates after the previous director resigned earlier this year. At a Thursday meeting, five board members voted for Anton to fill the position after several motions to appoint other candidates failed to garner enough votes.

But the board failed to make a decision on the next board president after David Bobzien, the former president and apartment owners’ representative, resigned due to a leukemia diagnosis earlier this month.

Despite two rounds of voting, the board remained deadlocked due to a tie between two directors: newly elected Andy Sigle and incumbent Sridhar Ganesan. The board deferred a decision to its next June 28 meeting when an apartment owners’ representative is expected to be seated. Sigle previously served on the board from 2011 to 2014.

Sigle’s first attempt to appoint Anton failed to gather enough votes. But after Director Sherri Hebert’s motion to appoint John Bowman and Julie Bitzer’s nomination to appoint Travis Johnson fell through, the board reconsidered Anton’s appointment. Both Bowman and Johnson ran for a board seat earlier this year.

Board members lauded Anton’s experience as a Reston resident for 30 years, her knowledge of the community and what Sigle called her “goals of independence and collegiality.” Newly-elected Director Ven Iyer applauded Anton’s “independent thinking,” a point that Hebert found “offensive.”

“I have to say Ven that I find it offensive that you think the rest of the board members do not think independently and do not make the votes on their own merit,” Hebert said.

Iyer also urged board members to recuse themselves from voting if any financial intermingling took place between them and other candidates in order to shield the board from accusations of “cronyism or impropriety.” Bowman and Johnson ran for seats on the board earlier this year.

Hebert abstained from voting for Anton and instead unsuccessfuly pushed for Bowman, who previously served on the board. She said he would “hit the ground running” as RA navigates complex issues in the coming months, including the absence of a permanent CEO and other staffing changes.

Rick Landers, who also ran for the position, was not nominated.

Bitzer said she looks forward to having another woman serve on the board. “I feel that we as a board in a sense owe Caren a chance to show how much more she can do and give to us,” she said.

Positioning herself as “an open, honest, ethical and transparent” candidate, Anton said she hopes to engage with apartment renters, who often have little knowledge of the function and role of RA. She also wants to explore ways to make the Hunters Woods Village Center a more enjoyable place to dine, play and gather.

“I come to you with no hidden agendas or allegiances,” she said.