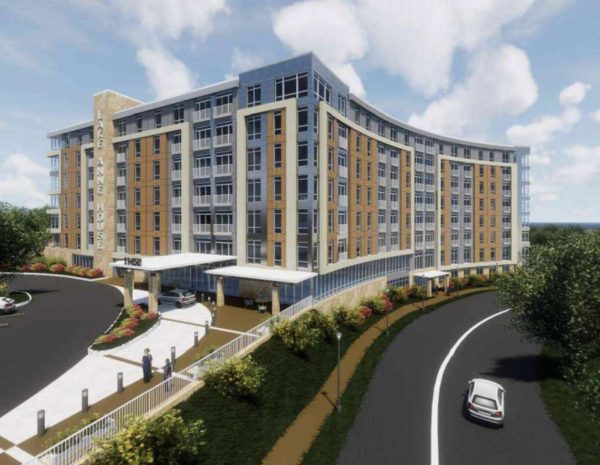 The Fairfax County Board of Supervisors has approved the redevelopment of Lake Anne Fellowship House, a 240-unit project that offers affordable housing for seniors.

County officials and the development team called the approval, granted on Tuesday (Oct. 16), a win for seniors seeking affordable housing in Reston. For years, community partners and Fellowship Square Foundation, the nonprofit organization that owns and maintains the current buildings, have contemplated ways to replace the aging buildings with a new facility.

All affordable units, currently distributed between two aging buildings built in the 1970s, will be replaced with a new 240-unit building along North Shore Drive near the intersection with Village Road. The eight-story apartment building is 200,000 square feet and includes a garage. The plan also adds 36 market-rate townhouses to the west side of the property that will help finance the construction of senior housing.

Lake Anne’s current tenants will stay in their apartment during the two-year construction of the new building. After residents move, the old buildings will be torn down and converted into townhouses.

“The residents are excited and they are looking forward to a brand-new facility,” said Hunter Mill District Supervisor Cathy Hudgins, adding that the addition of townhouses “brings in another neighbor to the community to coalesce with this current group of citizens and those that will come in the future.”

The project is led by Fellowship Square Foundation and the Community Preservation and Development Corp., a nonprofit real estate developer. The development team navigated through many difficult issues to bring the project to fruition, including preserving the number of affordable units and maintaining housing for all current tenants, according to Lynne Strobel, representative of Fellowship Square Foundation. A previous partnership with Novus Residences failed to gain traction in 2004.

The need for the project intensified recently as subsidies from the Virginia Department of Housing and Community Development expired or will expire within the next five years, Strobel said. The current buildings were also becoming difficult and costly to maintain, she said.

The units offer different levels of affordability, with the first tier beginning at 50 percent of the area median income or about $41,050 per person. The plan also includes eight publicly-accessible parks and transportation improvements. The development team plans to dedicate land for the future alignment of Village Road, which will include a new northbound lane, an eight-foot-wide raised median and 10-foot sidewalks on both sides of the road.

Michael Scheurer, a Fellowship Square Foundation board member, said the redevelopment effort was complicated, difficult and serves as a growing number of aging residents in Reston in need of affordable housing opportunities. The foundation has another 220-unit affordable senior housing project that is undergoing renovations.

“You can see that we have a longterm and substantial investment in the community,” Scheurer said.