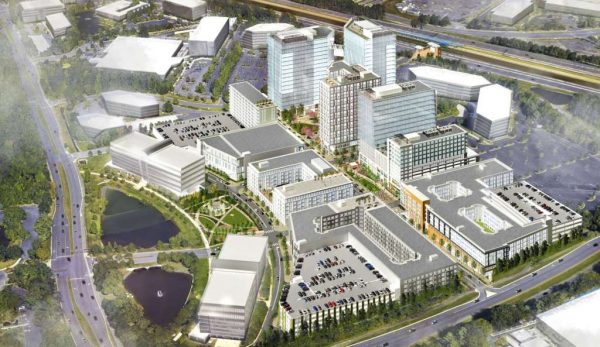 Three major development proposals head to the Reston Planning and Zoning Committee for a vote on Monday (August 19.

The committee, which meets at the North County Government Center at 7:30 p.m., will vote on plans for Isaac Newton Square, Halley Rise and Reston Station Promenade.

Peter Lawrence Cos and MRP Realty are partnering to redevelop Isaac Newtown Square, an aging office park at Sunset Hills Road and Wiehle Avenue, into a mostly residential neighborhood with around 2,100 units. The plan also includes an athletic field.

One Reston Co. LLC and Two Reston Co. LLC’s Halley Rise project — which is the site of the future Wegmans — is also on the docket. The developer is seeking the committee’s approval for changes to two blocks of development, which is located north of Sunrise Valley Drive and south of the Dulles Toll Road.

Finally, the board will consider changes to Comstock’s Reston Station Promenade project, which is north of the BLVD and Comstock’s development atop the Wiehe-Reston East Metro Station. Changes are largely limited to one building.

The complete agenda is available online.

END_OF_DOCUMENT_TOKEN_TO_BE_REPLACED

More Stories
Reminder: Sign Up for Reston Now SubscriptionsBack to School Book Sale And More This Weekend in Reston