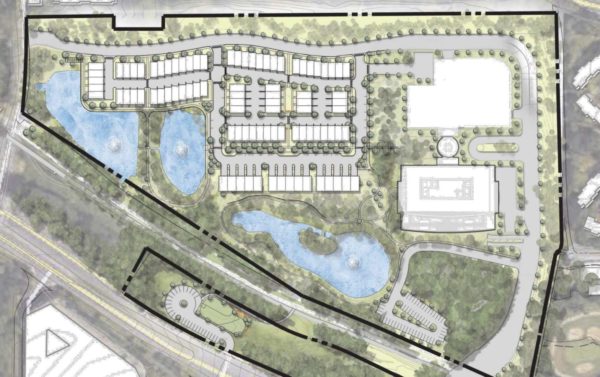 Wheelock Street Capital plans to build up to 90 townhouses next to Fannie Mae’s current offices at 11600 American Dream Way.

The move comes after Wheelock’s plans to redevelop the nearby Hidden Creek Club were opposed by neighboring community groups and Hunter Mill District Supervisor Walter Alcorn.

The company, which bought the sprawling 29-acre property in 2018, plans to build the townhouses in four blocks on open space.

Although the county’s zoning allows the Connecticut-based company to build two more office buildings on the site, Wheelock chose the residential route to complement existing office space on the site.

“The introduction of an option for residential use will help to complement and balance the existing office use on the property, and will create positive traffic impacts relative to the full office build-out option,” according to the application.

Its plans for the golf course, which it purchased in 2017, are more uncertain. Wheelock has proposed general plans for a community park and between 500 and 2,000 residential units. No formal proposal has been filed with the county yet.

But Alcorn publicly stated he would block any efforts to redevelop the golf course, which requires rezoning and is a flashpoint in several community groups’ efforts to maintain Reston as a community with two golf courses.

The Fannie Mae proposal is in its early phases. The project heads to the Fairfax County Planning Commission on Sept. 22 and a staff report isn’t expected until Sept. 7.

Meanwhile, Fannie Mae is expected to move into Boston Properties’ next phase of development in Reston Town Center next year.