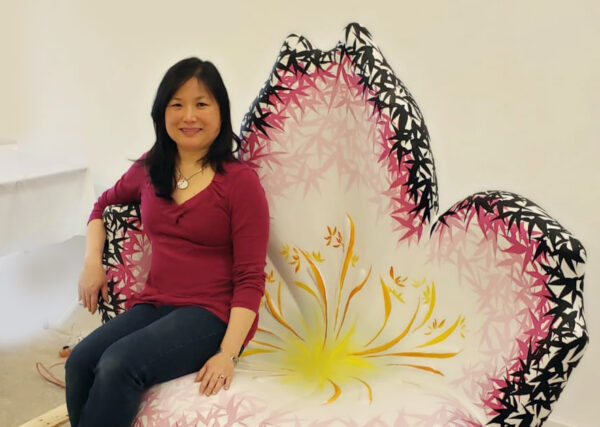 As the seasons shift to spring, the start of the National Cherry Blossom Festival is fast approaching.

Among the events kicking off this year’s festival will be Art in Bloom, a community-wide public art exhibition. The exhibition includes sculptures of oversized blossoms decorated and finished by 25 area artists, including Reston resident, and painter and ceramic artist, Tracie Griffith Tso.

The 4.5-foot-tall fiberglass sculptures will be installed in all eight D.C. wards, as well as National Harbor in Maryland and the Aurora Hills and National Landing neighborhoods in northern Virginia. The 25 artists were selected from 129 local and national submissions.

Griffith Tso’s sculpture, entitled ‘Sakura+Seasons,’ will be installed today at the Southwest Waterfront at 4th Street and M. The sculptures will debut March 20, the opening day of the festival, and remain on display through May 31.

“Many small strokes of my brush created a larger-than-life grand spectacle of the cherry blossom,” Griffith Tso said in a release. “The idea of modest contributions to a greater whole is enduring in many ways today and for the future.”

According to Griffith Tso, her sculpture is a tribute to age-old Japanese sumi-e or black ink brushwork as a nod to the gift of the cherry blossom trees from Japan in 1912. The flowers on the sculpture – which is sponsored by Mars, Inc. – are interactive, doubly functioning as colorful seating.

Her design was completed in eight days and painted freehand. Bamboo rings the edges of the blossom while orchids bloom in the center and chrysanthemums make up the base. The blossoms represent winter, orchids for spring, bamboo for summer and mums for autumn, according to Griffith Tso.

Additionally, the bamboo represents longevity and resilience on the flower edges, chrysanthemum represents prosperity in the base and orchid indicates bravery as the center to form the sakura, or cherry blossom, a symbol of optimism. 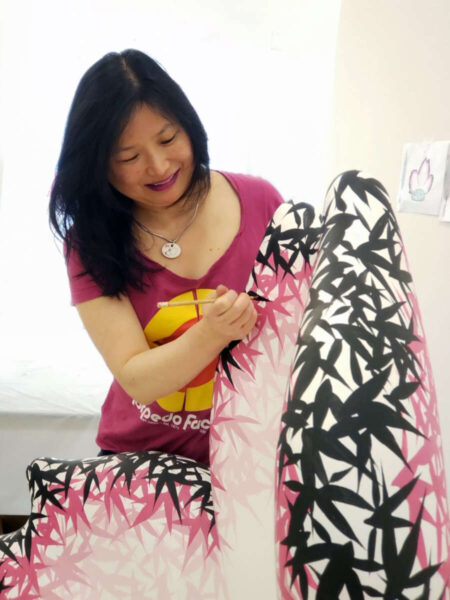 She teaches and lectures about Chinese brush painting nationwide and specializes in spontaneous flower-bird painting. She has specialized in Chinese artwork since she began art classes as a 12-year-old.

“The Art in Bloom exhibition will radiate springtime across the District and beyond,” Diana Mayhew, president and CEO of the National Cherry Blossom Festival, said in a press release.

“We can’t wait for everyone to see the artists’ designs on these larger-than-life blossoms.”

Anyone interested in viewing the exhibition pieces can visit the Art in Bloom map online to go on a Blossom Hunt in order to find the sculptures. Visitors to the sculptures are also eligible to win festival prize packages, including a $25 Amazon gift card, by posting photos of the pieces to social media, tagging the festival (@CherryBlossFest) in posts and adding #ArtInBloom in the caption. Winners will be chosen each week during the display period.

Art in Bloom will culminate with a Blossom Auction in late spring 2021. Proceeds from the sale of the sculptures will support National Cherry Blossom Festival programs and community initiatives.