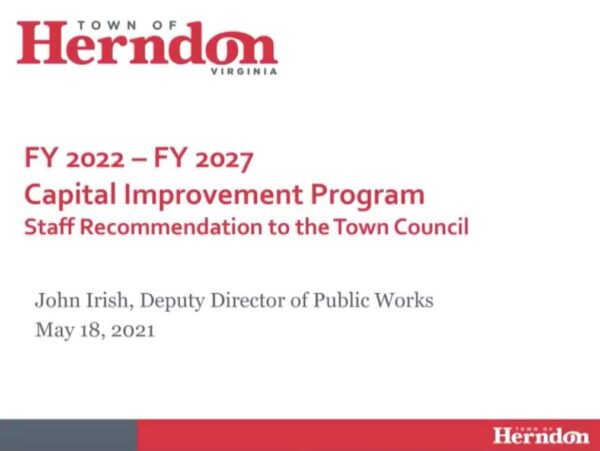 The Herndon Town Council is nearing approval of its fiscal years 2023-2027 Capital Improvement Program, which includes newly added projects like a traffic signal along Herndon Parkway at Sunset Park Drive and a possible expansion of the Herndon Police Department’s parking lot.

The updated CIP was reviewed and discussed during the town council’s work session on Tuesday (May 18) in anticipation of a public hearing and the document’s potential adoption on May 24.

Every year, the Town of Herndon updates its six-year schedule for public improvements known as the Capital Improvement Program. The projects scheduled for the upcoming fiscal year —  in this case, FY 2022 — are adopted along with the budget, while the rest of the program is adopted separately.

CIP projects have been limited the past two fiscal years due to budget constraints resulting from the COVID-19 pandemic. However, going forward, the town hopes these new projects will proceed on the proposed timeline.

The CIP has 49 projects, six of which are added in this year’s version, including:

Overall, town staff is recommending just over $150 million in CIP projects over the next six years, with a large portion of the funding coming from the general government fund.

Irish noted that a number of transportation projects are expected to undergo construction and be completed soon, so they will likely not be in next year’s version of the CIP.