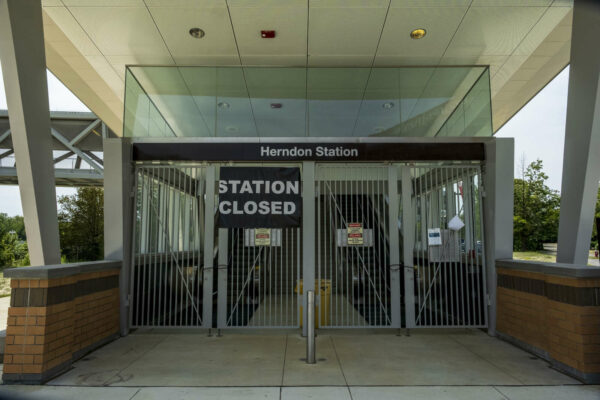 The Metropolitan Washington Airports Authority (MWAA) will not meet its Labor Day deadline for substantial completion of Silver Line Phase 2, likely pushing back the opening of the long-delayed $2.8 billion project yet again.

The announcement came in the final minutes of the Fairfax County Board of Supervisors’ transportation committee meeting earlier this week.

The delay is related to the work done this past weekend (June 26-27) to tie together the Silver Line’s second phase with the operating first phase at Wiehle-Reston East Metro station, forcing the station to close.

“We were made aware that the tie-in between Phase 1 and Phase 2, which was partially done this weekend, will actually need an additional weekend,” Martha Elena Coello, special projects division chief for the Fairfax County Department of Transportation, told the committee.

She noted that this was different information than what was in the presentation that had been prepared for the meeting.

“That will impact the substantial completion day of Labor Day and the magnitude of that impact has not been determined yet,” she said. “We expect to have that information within two weeks.”

An MWAA spokesperson confirmed that this is the case.

While MWAA told Reston Now last week that an additional weekend and a second shutdown of the Wiehle-Reston East Metro station will be needed to complete the work, it wasn’t clear how it would affect the timeline of the entire project.

Now, it’s clear that MWAA will not be handing over the project to the Washington Metropolitan Area Transit Authority (WMATA) by Labor Day weekend, which is only eight weeks from now. At this point, it is unknown when completion and hand-off could take place.

Metro needs about six months from substantial completion to complete testing and open the system, according to the presentation to the county board’s transportation committee.

With a Labor Day hand-off, Silver Line Phase 2 could reasonably be assumed to open in early March 2022. Now, the operating date could be pushed further into spring or even later.

When asked what work was completed last weekend and what still needs to be done, MWAA spokesperson Marcia McAllister told Reston Now by email that it was mostly electrical tasks:

This past weekend, the connection of the Traction Power system between Phase 2 of the Silver Line and the existing Metrorail system was successfully completed at the Wiehle-Reston East Metrorail Station. In addition, work was done to connect the Automatic Train Control System (ATC).The work was done by crews from Capital Rail Construction (CRC) and the Washington Metropolitan Area Transit Authority (WMATA) working closely together. The Airports Authority is now reviewing the work that remains to be done at the ATC tie-in prior to completion of the rail line and is assessing any schedule impacts.

She added in a follow-up that additional work still needs to be done, but a date has not been set for the next outage and shutdown of the Wiehle-Reston East Metro station.

Overall, Phase 2 is 99% completed, but even beyond the tie-in, there remains work still to be done around third-rail insulators, station platform pavings, and more.

However, Coello noted at the meeting that a majority of this work needs to be completed by revenue service and can be done after MWAA’s handoff to WMATA.

This is far from the first delay to beset the Silver Line’s second phase, which was initially set to be completed in 2018. The project will extend Metro from Reston into Loudoun County with six new stations.

The timeline has been prolonged by contractor issues, design changes, flawed materials, defective panels, and bad concrete, testing the patience and viability of a number of local Reston and Herndon businesses that intentionally set up shop near the stations.

Now, businesses, residents, and the region are going to have to wait at least a little bit longer for Silver Line Phase 2 to finally open.