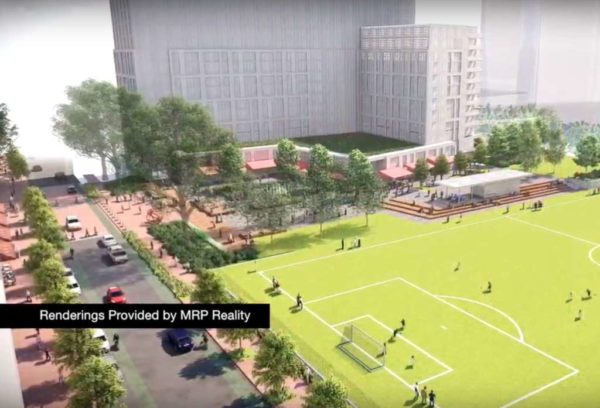 Pedestrian accessibility and walkability issues with a proposal to redevelop Isaac Newton Square were officially cleared by the Fairfax County Planning Commission.

At a meeting on Oct. 20, planning commissioners unanimously approved road and infrastructure plans for the northernmost area of the site. APA Properties plans to tackle the first 15 acres of the 32-acre project, which is located north of Sunset Hills Road and west of Wiehle Avenue.

John Carter, the planning commissioner for the Hunter Mill District, said the county and the developer had to sort through multiple issues associated with the site — many of which are common issues with urban planning in Reston.

Carter said the county’s priority was improving accessibility within the private neighborhood and to the Wiehle-Reston East Metro Station. Problems are especially apparent when different developers own private streets and have different plans for street maintenance and improvements.

“It is quite a problem dealing with these issues,” Carter said.

APA Properties committed to working with the county’s Urban Forestry Division to preserve willow oak trees on the property, which are currently in their prime and can last over 100 years.

The application was also smoothed out so that pedestrians do not have to walk into a stormwater retention facility after crossing a six-inch-high curb.

“That is not a workable scheme and we should try to avoid that,” Carter said, especially for individuals with a wheelchair or a cane.

The developer committed to raising the grade of the street up to the level of sidewalks and installing stormwater management troughs where there is no on-street parking.

Streetlights in the neighborhood will also be lower than in other areas. APA Properties will also install straight curbs instead of rolled curbs, which allow trucks and other vehicles to easily jump the curb.

Carter noted that straight curbs are necessary as parts of Reston continue their transition into more urban-style living.