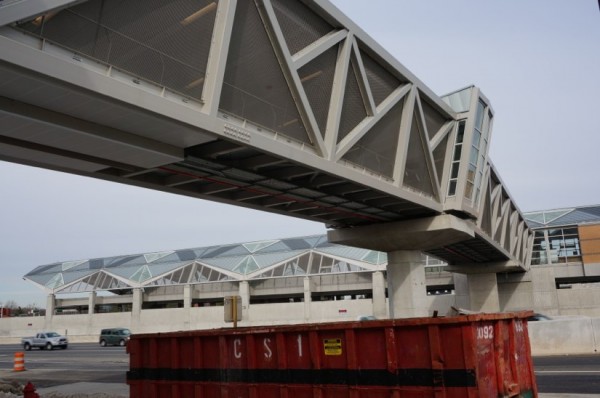 Phase 2 of Metro’s Silver Line took a significant step toward the future when it received the go-ahead to apply for nearly $2 billion in federal loans late last week.

The Northern Virginia congressional delegation said the the U.S. Department of Transportation TIFIA Credit Council has given preliminary approval to move forward on a $1.9 billion federal loan, which represents about one-third of the total cost of the Dulles Metrorail Project.

MWAA officials say the low-interest federal loan, which will be combined with $300 million in funding from the Commonwealth of Virginia, mean that tolls on the Dulles Tolls road are likely to remain stable through at least 2018.

There has been much concern in recent years that Dulles Toll Road users would have to bear the burden of the cost of Phase 2 of the rail line, which was slated to be built with no federal funds.

The $2.3 billion Phase 1 — which will run from East Falls Church to Reston’s Wiehle Avenue — received $900 million in federal money.Phase 1 has reached “substantial completion,” and an announcement on the timeline leading to the opening of the Silver Line could come as early as today.

Phase 2 did not receive the federal funds, and political posturing at the state and local level put the project in jeopardy for a bit. In 2012, the all-Republican Loudoun County Board of Supervisors threatened to remove their support, but eventually reaffrmed it in a 5-4 vote. In 2011, U.S. Transportation Secretary Ray LaHood was called in to help stakeholders at all levels come to a compromise.

Phase 2 of the rail will run from Wiehle Avenue to other Reston stops at Reston Parkway and Herndon Monroe, as well as stops at Dulles International Airport and into Ashburn. It is not expected to be completed until at least 2018.

The Metropolitan Washington Airports Authority, the lead agency in constructing the 23-mile SilverLine, will now team with Fairfax and Loudoun counties to submit final paperwork for TIFIA loan approval, which can be expected later this year.

“Today’s loan announcement is good news for Dulles Toll Road commuters and a huge step forward for the economy of Northern Virginia,” Sen. Tim Kaine, who worked to secure federal funding for Rail to Dulles as Virginia Governor, said in a statement.  “With Phase I nearly complete, we can now look forward to Phase II with renewed optimism and anticipation of the economic development and accessibility this project will bring to the Dulles Corridor.”

Rep. Gerry Connolly (D-Va. 11) called the announcement “a huge victory for Northern Virginia and commuters in the Dulles Corridor,”

“We’ve been working with the local and state funding partners and USDOT for nearly two years to secure this TIFIA application for the Dulles Rail project,” he said. “Along with keeping future toll rates in check, the loan will help lower overall financing costs for Phase 1, which is opening this spring, and Phase 2, which is under construction. It’s shaping up to be an exciting spring for Tysons, Reston, and the entire Dulles Corridor.”

Tolls on the Dulles Toll Road have increased for five consecutive years, and some critics say they could rise exponentially in coming years if no action is taken.

Reston 2020, the citizens group that analyzes area development issues, says several things can happen as the TIFIA paperwork goes forward — so it is best to approach the news with caution.