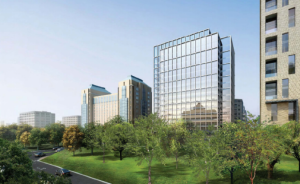 Public officials and private developers are going to have to work together as Reston embarks on rapid transit-oriented development.

That was the takeaway from a legislative forum, The Changing Future of Reston, sponsored by the Greater Reston Chamber of Commerce last week.

Speakers included officials from the Fairfax County Department of Transportation, which says Reston will need more than $2.6 billion in improvements, as well as representatives from Boston Properties, JBG Companies and Reston Association.

The county is in the process of identifying what projects will need to be done to alleviate traffic, make new streets in an urban  grid pattern, and, most importantly, where the money will come from.

The county hopes to have a longterm plan in place later this year, said Janet Nguyen of FCDOT.

But don’t expect lots of immediate change. There likely won’t be a large amount of public funding until at least 2021, said Nguyen. That’s when a new cycle of the county’s six-year transportation project priorities will be formulated.

Money for changes, many of which were outlined in 2014’s Comprehensive Plan Amendment, will eventually come from a variety of sources, including federal funding, state funding, county contributions, developer proffers, and possibly a special service district, county meals tax or a rise in county real estate taxes.

Pete Otteni, senior vide president of development for Boston Properties, said “I think private developers and the public have to be in this together.”

“An interesting way to look at this is the areas around Metro, if they develop under current zoning, they will be 100-percent commercial. But if you talk about changing it into the kind of development that should reduce traffic, where people live and work in same location, you will be taking taking cars off road. We have to look at what will happen if we don’t do anything. We have to do something. It can be can be solved, but we have to be in this together.”

That development may happen in stages as there are longterm leaseholders in the existing office buildings. Otteni estimates it could be 5 to 10 years before “total build out.”

But that gives additional time to figure out the infrastructure.

Money would go for road widening, intersection improvements, the Soapstone overpass, and an Dulles Toll Road underpass near Reston Town Center, among other projects.

The $1.28 billion grid network in the transit station areas would likely be paid for mostly by developers, but possibly with a service district in the areas that will see the most development, she said.

A service district is a special tax that pays for improvements in a defined area, according to Fairfax County. It is established by the Board of Supervisors and does not need to be approved by residents. In Tysons, the rate is per .05 cents per $100 of home value.

The Tysons special service district assessment will pay for $253 million of improvements, or about half of the Tysons’ urban improvement costs. Overall, the urban grid in Tysons will cost $865 million. More than $561 million will be covered by developers, said the county.

Nguyen used the recent Tysons service district as a model, though she said Reston’s might look different because some infrastructure is already in place.

Both Otteni and JBG’s Greg Trimmer said having an urban grid of streets in Reston’s transit areas is a top priority.

“The grid of streets is critically important,” said Trimmer. “We have to veer transit and traffic solution onto the right course. JBG and Boston Properties are heavily invested in Reston. We really look to be part of the solution.”

JBG is building the second phase of development at Reston Heights. It also hopes to rezone at least one office building across the street from Wiehle-Reston East for multifamily housing. JBG is also developing RTC West, a retail and office development near the Reston Town Center Metro station.

An urban grid provides for better walkability and slower traffic.

“It works very well in Reston Town Center,” he said. “We want to complete that grid down to and through Metro station.”