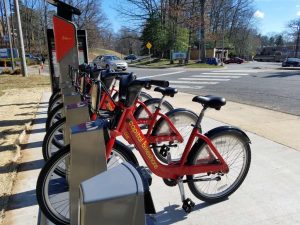 Usage of Capital Bikeshare in Reston has reportedly been strong, and the program will likely be expanding even further in Reston.

Adam Lind, the Fairfax County Department of Transportation’s bicycle program coordinator, says FCDOT is working toward using a previously received federal TAP (Transportation Alternatives Program) grant to add 10 additional stations to Reston. Those will be on top of the 12 already installed and the three more that have been previously scheduled for implementation.

“We are happy with the ridership we have seen so far [in Reston], especially since we haven’t fully built out the network with the first 15 stations and as we’ve only been open through the fall and winter,” Lind said. “We anticipate seeing an increase in members and ridership as we transition to the spring and summer, when bicycling in general picks up.”

Nine stations opened in Reston in October, while three more have opened so far this year. FCDOT is funding the operations in Reston and Tysons, as approved by the Board of Supervisors last year.

Data released earlier this week by Mobility Lab, an Arlington-based transportation-demand analyzer, showed strong usage of Bikeshare in Reston in the last quarter of 2016. Mobility Lab’s analysis of the numbers suggested, among other findings, that riders are taking “longer, more recreational” rides in the Town Center area as well as using Bikeshare to travel from the Wiehle-Reston East Metro station to commercial and residential centers.

Lind said it was expected that the stations at Reston Town Center and the Metro station would have the most ridership, but other numbers have also been encouraging.

“We’ve been pleasantly surprised that the station at Sunset Hills and Old Reston Avenue (near the W&OD) has seen such high usage (third-most trips),” he said. “We’ve also seen good usage out of the new stations near Lake Anne, which we expected as well.”

Lind said adding more bike lanes, a topic discussed at a recent community meeting, would “greatly assist the continued growth and expansion of Capital Bikeshare in Reston both north and south of the Toll Road.” There are currently no Bikeshare stations in the southern part of Reston.

Residents interested in having a Bikeshare station installed in their neighborhood can email their request to [email protected] or use the interactive map at www.cabistations.com. Lind said public outreach will also take place in the coming months to discuss suggestions about where the future stations will be placed.

END_OF_DOCUMENT_TOKEN_TO_BE_REPLACED

More Stories
Pet of the Week: TubbsFamilies Invited to Experience Life on the Farm at Frying Pan Park