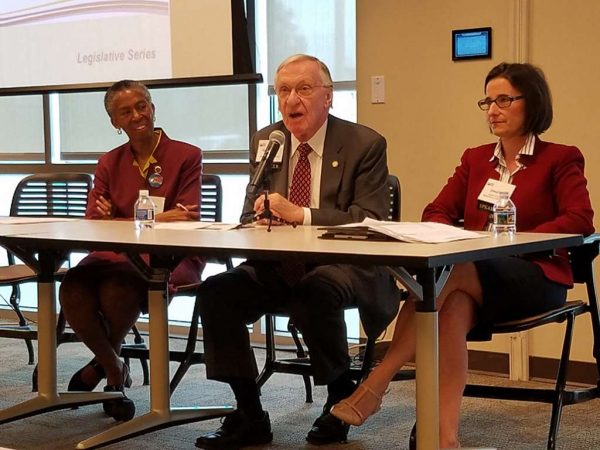 There may be a sense of frustration and concern regarding ongoing construction of Metro’s Silver Line, area elected officials said Thursday, but its great potential must be remembered.

Fairfax County Supervisor Cathy Hudgins and state delegates Ken Plum (D-Fairfax) and Jennifer Boysko (D-Fairfax/Loudoun) talked about Metro and the surrounding future development during a legislative panel discussion sponsored by the Greater Reston Chamber of Commerce and hosted by Dominion Virginia Power in Herndon. Plum, the former state chair of the Dulles Corridor Rail Association, said it is important to put the status of Metro’s Silver Line in perspective.

“We really ought to stop for a moment and celebrate where we are,” Plum said. “For 25 years of my life I worked on that project, and it was announced to be dead half a dozen times, at least. … Now, by 2020, we’re going to have it all the way out into Loudoun County. And we have an incredible opportunity with that.”

A large amount of development has happened or is in the works in the area of the Wiehle-Reston East Metro station, the current western terminus of the Silver Line. Other projects are also springing up near the line’s future stations in Fairfax and Loudoun counties.

The Metro Washington Airport Authority’s Dulles Corridor Metrorail Project, which is overseeing construction, announced recently that Phase 2 work to extend Metro through Reston into Dulles Airport and onward to Ashburn is more than 56 percent complete. However, deficiencies in Metro’s budget and decreasing ridership have raised a number of questions in recent months about the future viability of the transit system.

Boysko, whose district includes Herndon, praised the state’s creation of the Metrorail Safety Commission to examine how Metro is being organized and managed. She said as Phase 2 of the project continues, it is imperative that safety issues as well as financial and operational performance are properly monitored and addressed.

“People say this is the least functional transit system in the country,” she said. “We have such a great opportunity as we are expanding into Phase 2, [but] it has to be a success. We have really focused our economic development around Phase 2 being successful.”

Hudgins, who is also a member of Metro’s Board of Directors, said this is a conversation she “live[s] every day.” She said Metro is unique in many ways, most notably in its partnership between multiple jurisdictions as well as in its infrastructure itself.

“I think people need to understand, it is a different kind of railroad,” she said. “That system is one of the most difficult systems [to maintain] of all those in the country.”

Plum said Metro needs to be revitalized, and in order for that to happen, it needs to continue to receive the support of the surrounding community.

“Please, don’t wash your hands of Metro,” Plum said. “It’s vital to the economic development of our region and I think we all recognize [that].”

The legislative recap event sponsored by the Greater Reston Chamber of Commerce is a chance for local businesspeople to keep abreast of important issues in the community, said Mark Ingrao, GRCC president and CEO.

“We’re a catalyst for business growth and entrepreneurship in this area of Fairfax County,” he said. “We think that we have the type of programming our members are looking for to connect them with other businesses [and] to educate them on legislative things like this.”