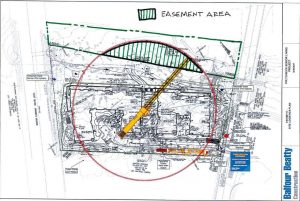 At its meeting last week, the Reston Association Board of Directors discussed requiring compensation for use of an aerial crane for construction on Colts Neck Road that would extend over RA property.

The request by Atlantic Realty Companies is for an aerial crane that it says is needed for the placement of the garage and building structure elements at the Hunters Woods at Trails Edge construction site (2222 Colts Neck Road). The crane’s arm would extend over a portion of RA common area north of the site, the former home of the United Christian Parish church.

The request to provide the easement in-kind was originally part of the meeting agenda’s consent calendar, but it was removed for further consideration. When the topic came up, Director John Mooney spoke up.

“That we would help something like this out is, I think, totally appropriate,” Mooney said. “But in my experience, local municipalities charge a fee for this species of temporary construction easements. I think that we as Reston Association should be equally diligent to seek that.”

Prior to moving to Reston last year, Mooney was senior assistant county manager in Arlington.

No live loads would be carried over the RA property, just the aerial arm of the crane. The arm would be above the tree canopy and would not impact the ground area or trees, ARC says. RA would also be added as an additional insured property on ARC’s insurance policy.

CEO Cate Fulkerson and Sherri Hebert, board president, asked what the going rate for such an agreement would be. Mooney said the formula to determine the charge would involve the land value of the parcel in question and the length of time for which it would be used. A representative for ARC said the aerial crane would be in use for about nine months.

“We’ve granted numerous easements to the Reston Association for trails, for restoration of the stream, with no compensation,” said the ARC representative at the meeting. “We think we’re trying to be a good friend and neighbor and we really request the same thing in kind.”

When it is complete, the IntegraCare facility will have 210 senior-living units — including 90 independent living units, 81 for assisted living, 24 for memory care and 15 for special needs.

Approval of the easement was tabled and discussion was moved to executive session.

END_OF_DOCUMENT_TOKEN_TO_BE_REPLACED

More Stories
Reston Merchants Will ‘Regroup’ to Consider Impact of Parking Fee ChangesWhat’s Going On Around Reston This Weekend?