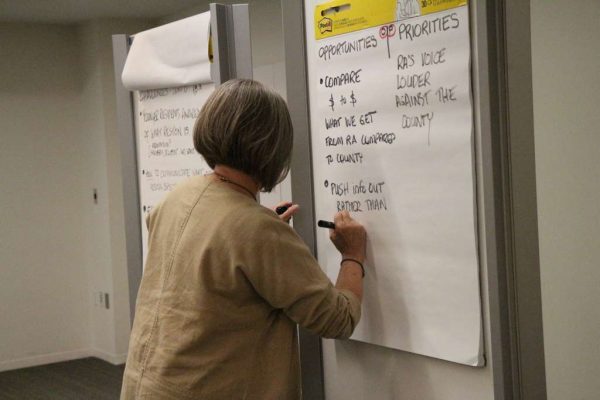 Canner was speaking to RA Board directors and CEO Cate Fulkerson during an informal feedback-gathering meeting Thursday evening at RA Headquarters. Canner and others expressed their displeasure with how they feel Hudgins and other members of the County Board of Supervisors are allowing developers to take over Reston.

“They’re moving us in a different direction, trying to make us look like Arlington,” Canner said.

Victoria White, Hunters Woods/Dogwood District director, said Board president Sherri Hebert and vice president David Bobzien have been having weekly meetings with Hudgins to try to facilitate more communication. Eric Carr, At-Large director who moderated the meeting, said it’s the start of a conversation to try to improve Reston’s standing with the County.

“One of the underutilized resources we have is our ‘soft power,'” Carr said. “We don’t have any legislative power, we’re not a municipality, but boy, can we be annoying — in a good way.” 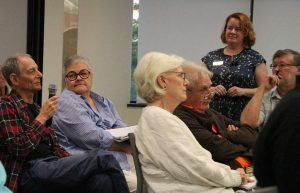 Carr said it is important for Reston Association members and the Board to stay vigilant in letting the County know the problems Reston citizens have with new developments and other legislation. Some members also expressed displeasure with what seem to be futile attempts to get their opinions heard during county meetings, citing particularly the recent public meetings on the Planned Residential Community zoning ordinance amendment.

John Mooney, At-Large director, harkened the St. John’s Wood public meetings — which resulted in the project being deferred indefinitely — as he reminded residents that their well-formed and -organized thoughts on specific plans do matter.

“You have to have the community involved on policy level issues and zoning ordinance issues, but you also have to have communities get really informed, bust their butts understanding what’s going on in particular projects,” he said. “You have to have those two levels of citizen interactions … for political change to happen. It can’t happen with just one line of attack or one line of engagement.”

Mooney said that in addition to the meetings taking place between RA Board leadership and Hudgins, there are staff-to-staff meetings and other interaction going on with the County. Members in attendance said they’d like to know more about how those conversations are progressing.

Members continued on to say it is difficult to learn any information about what is happening within Reston Association, because of a lack of communication and what they view as a confusing website. Most agreed they get more information from local media and from Nextdoor than they do from RA itself. Carr agreed that work needs to be done to better reach members.

“We have an extensive site, but we’re not reaching you the same way other avenues of information are reaching you,” Carr said.

Mike Leone, RA’s communications director, said he is working to increase Reston Association’s presence on Nextdoor to push more news out to the community more efficiently. Attendees were also encouraged to sign up for RA’s email bulletins and other local newsletters.