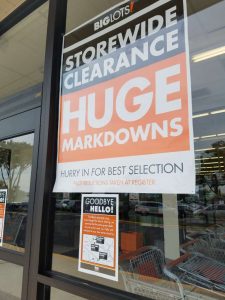 Local Big Lots fans will soon have farther to travel to get to their favorite discount store.

The location at 490 Elden St. in the Herndon Centre plaza will close Oct. 15, a Big Lots media representative confirmed to Reston Now. Signage now in place outside the store informs customers that after that date, they can visit locations in Sterling (300 Enterprise St.) and Fairfax (11181 Lee Highway).

Lotte Plaza Market will be taking over the 26,000-square-foot Big Lots space in the spring, Herndon spokesperson Anne Papa Curtis confirmed to Reston Now. We first reported in July that the market, described on its website as “the premier source for Asian groceries in Maryland and Virginia,” would be opening in the plaza in early 2018.

In the interim, a large percentage of the west side of the plaza will be vacant, following the closing of Kmart earlier this year. The 84,000-square-foot former department store space is expected to be broken up among several new businesses, Herndon Mayor Lisa Merkel said at the time of its closing.

More Stories
Too Many People in Small Space Results in Postponement of Meeting on Increasing Density CapReston Real Estate: Townhomes Are Waiting for You