Reston residents argue that a zoning ordinance amendment proposed by Fairfax County would cause the community to become too overpopulated to manage.

That makes what happened at a scheduled county meeting to discuss the topic Monday night particularly ironic.

After hundreds of Restonians crowded into the cafeteria at Lake Anne Elementary School for the forum, Fairfax County Supervisor Cathy Hudgins and staff from the Department of Planning and Zoning told them the meeting would have to be postponed until a larger venue could be booked.

“It is a safety issue and a code violation [to have so many people in the cafeteria],” Hudgins said to a chorus of boos from the crowd, many of whom were wearing yellow-shaded Reclaim Reston and Rescue Reston T-shirts. “You did come out and that’s important, and I’m glad that you did, we appreciate that.”

The proposal from the county’s Department of Planning and Zoning would bump the overall limit on people per acre in Reston’s Planned Residential Community (PRC) District from 13 to 16. (The density is currently about 11.9 people per acre.) The PRC District does not include any of the Transit Station Area property surrounding the Wiehle-Reston East and Herndon Metro stations, nor does it include most of the property in the Reston Town Center Metro station TSA south of the Dulles Toll Road.

The ordinance amendment would also allow for the Board of Supervisors to be able to approve individual developments in excess of 50 dwelling units per acre in TSAs within the PRC and when in accordance with Comprehensive Plan recommendations. Those areas that would be marked for major residential development include all of Reston’s village centers.

According to signage displayed in the cafeteria at Lake Anne Elementary School, the fire code caps the number of occupants of the cafeteria at 210 when tables and chairs are present, as they were Monday night. Estimates of attendance for the meeting ranged from 350 to over 400. 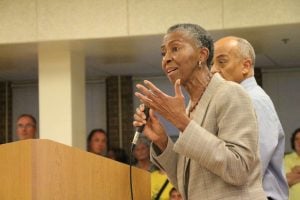 Dozens of meeting attendees filed out the door after Hudgins made the announcement, saying they were making room for the meeting to go on as scheduled. Meanwhile, suggestions were shouted that the entire meeting be picked up and moved to the school’s gymnasium or even outside.

However, the decision to postpone had already been made.

“We want to communicate, and we will try to find a solution,” Hudgins said. “We’ll get a facility where we can accommodate you.”

The large turnout came after a community meeting last week where members of Reston activism groups encouraged residents to spread the word and rally attendance. One of leaders of that event was Dennis Hays, president of the Reston Citizens Association.

“I’m disappointed that we’re not having the meeting, particularly after several hundred people volunteered to walk out to try to get us down to the [maximum occupancy] number,” Hays said Monday night. “[But we] sent a message. The message was that the citizenry are concerned by this and willing to stand up and say something.”

The Reston Association Board of Directors had been scheduled to hear an update on the situation and take an official stance on it at their meeting Thursday; however, that will now likely be postponed as well, President Sherri Hebert said.

Hudgins and Fred Selden, director of the county DPZ, said the proposal will not move forward in any way until all feedback from the community has been received.

“This is not a done deal,” Hudgins said. “If it was a done deal, we would have stopped [scheduling meetings] long ago. We’re back here to continue to hear from you.”

Information about the date, time and location of the rescheduled meeting will be provided when it becomes available.