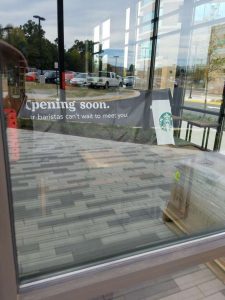 Another new Starbucks will soon open in Reston.

Signs inside the future coffee shop at 12130A Sunset Hills Road, within the RTC West development, indicate that the new Starbucks will be ready soon. The storefront is attached to Cooper’s Hawk Winery and Restaurant, which opened in August.

A spokesperson for RTC West developer JBG Smith said she could not provide an exact opening date for the Starbucks. An “opening soon” sign hangs inside, visible through the front windows. Several “Now Open” sandwich boards are also stacked inside, ready for deployment.

Six additional restaurants are also planned for the development. Significant work has been done at the sites of the future Nando’s and Mezeh restaurants, which have been in the plans since April 2016. Other coming restaurants, which were announced earlier this year, include BGR The Burger Joint, Punjabi by Nature, The Black Squirrel and Honeygrow.