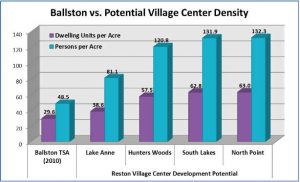 Fairfax County data and US Census 2010 data for Ballston show that, with the exception of Lake Anne Village Center, where a redevelopment plan is already in place, the number of dwelling units (homes) per acre will potentially be at least twice as dense as in Ballston. Moreover, because Fairfax County anticipates a fraction more people in each household, the potential number of residents per acre runs better than two and one-half times that experienced in Ballston.

At the risk of repeating ourselves, Reston’s Village Centers are intended to be neighborhood-serving gathering places. They are not meant to be transit station areas without the “transit.” According to US Census data, Ballston is the most populous area in Arlington County and the fourth most densely populated (people per acre). The notion that TSA residential densities should be applied in Reston’s Village Centers is preposterous and contradicts everything that the Reston Master Plan says about their development.

Any notion that residential density in excess of 100 people per acre is consistent with these objectives is ludicrous.

If you don’t want your neighborhood Village Center to be blown up and replaced with one or more 12- to 14-story high-rise apartments or condos, please come to the community meeting on the Reston PRC zoning ordinance on Monday at South Lakes High School. Bring your friends and your children for a major civics lesson on local government. Learn, question, and challenge what you hear. It is our Reston and we must act to protect it by showing our revulsion with this absurd zoning ordinance proposal.