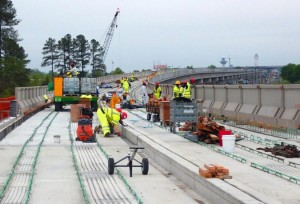 A zoning change to allow for more development and accommodate population growth was discussed during The Kojo Nnamdi show Wednesday — a conversation that painted the ongoing issue as a microcosm of a perennial debate on how to manage development, growth and public infrastructure.

Leslie Johnson, zoning administrator for Fairfax County, said the zoning change, which would increase the population density per acre from 13 to 16, along with a host of other changes that implement the Reston Master Plan, a planning document that lays out the vision for the area, said Fairfax County officials are working hard to ensure development matches the pace of public infrastructure.

She also noted the county is aware of the need to preserve already stable residential neighborhoods that surround areas along the Metro that are targeted for growth.

“We can’t stop development waiting for the roads to be built,” Johnson said, adding that the county recently developed a funding plan for road infrastructure and developers are helping in tandem.

Johnson noted that the zoning change was consistent with master plans adopted in 2014 and 2015. She also said she was encouraged by vehement opposition that surfaced in two community meetings earlier this year.

“It’s a good sign that people are engaged because we get criticized for not engaging enough. I think peoples’ voices need to be heard,” she said.

Nimbyism is not the rallying point for people opposed to the zoning change, according to some residents.

Terry Maynard, co-chair of Reston 20/20, a citizen activist group that is against the proposal, said many people are opposed to the scope of development, not development itself.

Absent adequate public infrastructure for current residents, allowing more population density in pockets in Reston damages residents’ quality of life. He also noted projections about population increases as a result of the zoning change do not account for growth from affordable housing units and bonus density allowed for some developments.

“The Reston Master plan is very weak in defining infrastructure needs for the community in sharp contrast for a similarly-prepared plan for the Tysons area,” he said.

The cart-before-the-house argument has been echoed in community meetings.

But, to some extent, the zoning change is an exercise in how open communities are to change, especially as the county is in “a state of transition” in anticipation of Metro, which the county has been preparing for for the last 20 years, Johnson said.

Amendments to the zoning change are expected. The county is leaving the board with the flexibility to determine what population density between 13 and 16 per acre is most feasible, she said. Johnson also said the county was open to changing the maximum number of residential units allowed per acre.

A round of public hearings are expected to begin early next year.

Virginia, unlike Maryland, is a conditional zoning state, which means it lacks the Adequate Public Facilities Ordinance, a mechanism that attempts to manage growth by ensuring adequate roads, schools and public facilities are in place as development occurs. APFO laws vary by state and county.

A complete recording of the show is available online.