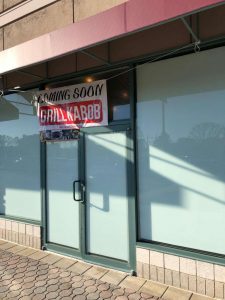 Plaza America, will welcome Grill Kabob, an Afghan restaurant with other locations in Virginia, Maryland and Washington, soon. A sign announcing the arrival of the chain, which serves made-to-order kabobs and other authentic specialities, was posted in the vacant storefront yesterday.

Grill Kabob will replace Primo Italiano at 11888 Plaza America Drive. The pizza and sub restaurant, which had called the shopping center home since it opened in the 1990s, left in May 2015.

Since then, the location has remained vacant. Staples, which was located in the same shopping center at 11620 Plaza America Drive, also closed on Oct. 7. Total Wine & More, a beer, wine and spirit purveyor, plans to open by the end of the year.

A restaurant representative said it was unclear when Grill Kabob will open. The owner was unavailable for comment. The restaurant launched in 1998 with its first location in the food court at Springfield Mall and has since opened in 14 locations, including stand-alone restaurants.

Mahmoud Mahdjoub, a journalist in Afghanistan, immigrated to the United States, joining his two cousins who fled Afghanistan during the Soviet-Afghan war in 1980. The chain’s website describes Grill Kabob as one of the largest kabob chains in the country.

The restaurant in Reston is just under 4 miles away from another location in Herndon. Other nearby restaurants are located in Dulles Town Center,  Tysons Corner Mall and Manassas Mall. Its menu includes an assortment of kabobs, sandwiches, gyros, salads, falafel platters and more.