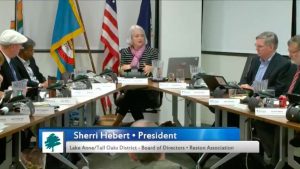 In an effort to encourage transparency and accountability, Reston Association’s board of directors is inching closer to adopting a new conflict of interest policy.

The board will consider a draft proposal at a special meeting tomorrow at 4:30 p.m. in RA headquarters. A tentative public hearing is set for Feb. 22.

Two independent reviews have called for a refined code of ethics over the last two years, including StoneTurn Group’s 2017 assessment of the controversial Lake House purchase. Since then, an ethics subcommittee began drafting an updated code of ethics to manage personal interests of RA officials that may conflict with RA interests.

The policy requires individuals to explicitly delineate economic interests and personal interests, a requirement that is currently “unclear” in the current policy, according to RA documents.

RA’s policy was thrust into the spotlight in February last year. RA member Ed Abbott filed a complaint against former At-Large Director Eve Thompson, alleging Thompson did not disclose her ownership of Lake Anne Coffee House  and her husband’s presidency of the Lake Anne of Reston Condominium Association. Thompson resigned in June.

Feedback by Abbott and others characterized the policy as pedantic, unnecessarily long and complicated, according to meeting materials. The board will review the policy at its Friday meeting and discuss changes.

The timeline for a public hearing and board adoption are not final, but the board could adopt the revised policies in March after a Feb. 22 public hearing.

Tomorrow’s meeting will not be streamed live, but a YouTube recording will be available on Monday at 5 p.m.