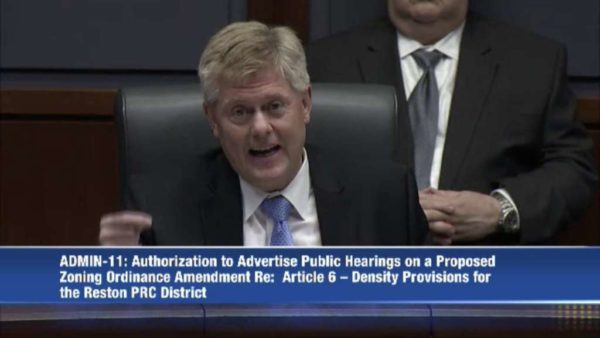 Fairfax County’s Board of Supervisors disagreed about community input on contentious proposed zoning changes, before authorizing public hearings early next year on the changes at their meeting today.

The proposal, which would increase the population density in Reston, has sparked a backlash from community groups, including the Reston Association, Coalition for a Planned Reston and Reston 2020.

Dranesville District Supervisor John Foust vented frustration at the Dec. 4 meeting that Reston residents have not heard back from the county regarding the public hearings for the zoning proposal.

In response to Foust’s concerns, Hunter Mill District Supervisor Cathy Hudgins said that locals have had plenty of opportunities to get the desired information.

County officials began small workgroup sessions hosted by the Coalition for a Planned Reston, a grassroots organization, and the Reston Association in July to discuss the controversial plan.

“Yes, there are some questions that people have,” Hudgins said. “Those questions have been answered before or are not relevant to this.”

Hudgins stressed that consideration of the proposed zoning changes is moving forward because of the work, including 13 follow up meetings since May and regular meetings with the Reston Association, already done.

Braddock District Supervisor John Cook said that verbal responses from staff to locals are not enough, adding that the community would benefit from written questions and answers available online.

“I don’t think it’s enough to have oral questions,” Cook said. “Not everyone can get to public meetings.”

Cook added that community input must have limits. “It’s fair to have a cut off date for questions,” he said.

The Fairfax County Planning Commission has 100 days from the referral — the staff report published Dec. 4 — to take action on the zoning proposal. The Board of Supervisors authorized public hearings on the zoning changes for 7:30 p.m. on Jan. 23 and at 4:30 p.m. on March 5.

.@johnfoustva venting frustration that Reston residents not hearing back from @fairfaxcounty when it comes to advertising public hearings for zoning ordinances. To which the Dept. of Planning/Zoning places blame on Reston—never guaranteed response to every inquiry. Wow, not good! pic.twitter.com/bAcnJ3jtPh