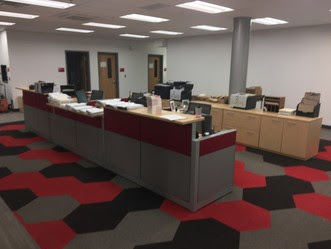 The renovation’s second phase was mostly completed during the summer, according to Herndon High School assistant principal Jim Hannon. The school’s main gym was expanded by roughly a third, while the renovation of the auxiliary gym was completed alongside the construction of new locker rooms, a weight room and art rooms.

“To start this school year, if we weren’t in the virtual world we are in right now, we’d have students in the new areas that were completed in phase two,” Hannon said. “Those areas include both upstairs and downstairs, first floor and second floor, the completion of the wings that were for math, ESOL, social studies and English.”

Very few outstanding items remain from phase two of the renovation before its final completion. Among these is the installation of the main gym’s new bleachers, due to supply line issues caused by some vendors temporarily shutting down as a result of COVID-19.

The completion of the second phase follows the introduction of a new wing to the back and front of the building, as well as a new library, main office, and administrative and counseling office. The first phase, which was completed in the fall of 2019, also included a new entrance, 65 classrooms, a gourmet foods room, science labs and additional classroom spaces.

The progress of the renovation has also allowed the school to move approximately 60-65 school personnel from outdoor trailers into the freshly renovated or constructed spaces, according to Hannon.

Following the removal of the trailers, the renovation process will begin on the parking lots as well as the school’s tennis courts as a part of phase three.

Other plans during this phase include a new wrestling and gymnastics room and renovating the school’s performing arts area, which includes the auditorium, and rooms for the orchestra, band and chorus.

Phase three will take place during the majority of this school year, Hannon said. The exact completion date of the project has not yet been determined.

The final phase of the project will include renovating the existing cafeteria to feature a food court design, as well as updates to the tennis courts, the stadium press box and concession stands.

As part of the project, the school will undergo a complete renovation with new plumbing, HVAC, fire alarm and protection systems. Also, the campus will include a new bus loop, more parking, bike racks and improved stormwater management. The renovation project in total includes 138,558 square feet of additions and modifications to expand the school to 431,000 square feet, according to the webpage for Grunley Construction Company, Inc.

“Hopefully when we move back in the building, we’ll have very few classes still outside in the trailers. And the majority of those are going to start being removed in September and October,” Hannon said.