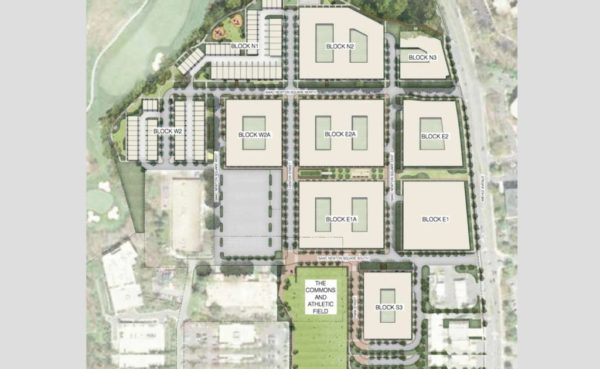 In a final development plan submitted to Fairfax County on March 18, APA Properties proposes eliminating 299 parking spaces that currently serve three buildings it plans to remove from the property.

The buildings up for removal include office buildings at 11440 and 11410 Isaac Newton Square North as well as 1928 Isaac Newton Square, which houses Reston Montessori School. The three structures collectively require 5o7 parking spaces, according to the development plan, which has not yet been accepted by the Fairfax County Department of Planning and Zoning.

“299 spaces to be removed is less than 507 spaces required for the buildings to be removed, therefore there is no impact to the parking requirement,” APA says in its plan for the first phase of roads for the development.

The developer stated in its conceptual development plans for the project, which was approved by the Fairfax County Board of Supervisors on Oct. 15, 2019, that the site will feature 4,063 parking spaces — 3,920 garage spaces and 143 surface spaces — the minimum amount required for what it is envisioning.

In addition to 2,100 residential units, about 300 of which will be hotel rooms, the Isaac Newton Square redevelopment will contain 260,000 square feet of office, around 69,000 square feet of retail space, and a synthetic turf athletic field.

The submitted final development plan also provides a closer look at the new grid of streets that APA is contemplating for the 15.3-acre northern section of the site. The map shows the addition of two private roads — Center Street and Isaac Newton Square East — extending north perpendicular to the existing street of Isaac Newton Square North.

Isaac Newton Square South is expected to be the only public road on the property, but APA says in its proffer statement that “a public access easement…will be recorded over all private streets and associated sidewalks internal to the development.”

The developer’s proposed road and infrastructure improvements also include a proposed 10-foot-wide asphalt trail along Wiehle Avenue that it says will satisfy Fairfax County’s countywide trails plan, which calls for a major paved trail on Wiehle.