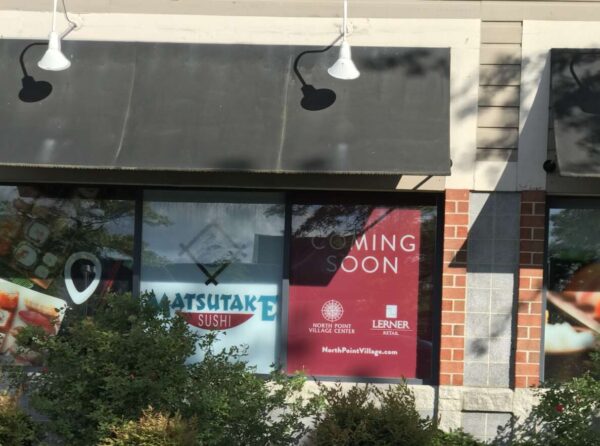 Matsutake Sushi is expected to open to customers in November, Matsutake National Inc. President Heesook Chun confirmed to Reston Now in an email.

Matsutake Sushi will be moving into 1492 North Point Village Center, which has been vacant for the past two years. The most recent tenant was a Boston Market that closed in 2019.

There are other Matsutake Sushi locations in the D.C. region, including one at Worldgate Centre in Herndon that closed, Washington Reagan National Airport in Arlington, and Frederick, Maryland.

Chun says he no longer owns most of them, except for the Arlington venue.

The menus at those restaurants include sushi, sashimi, teriyaki, hibachi, and tempura.

North Point Village Center is owned by Lerner Retail, whose wide area portfolio includes owning the Spectrum at Reston Town Center, which is still set to be redeveloped.

North Point Village Center has had several comings and goings over the last year.

Christie-Adam Salon and Spa replaced another hair salon earlier this year. GNC shuttered last summer. Also this time last year, a fire broke out on the shopping center’s roof and swastikas were found spray painted on the sidewalk. FCPD classified it as a hate or bias incident.

North Point Village Center is one of Reston’s five village centers and the last one built. It was opened in 1993.