Fairfax Connector suspended fare collections last year as a temporary health measure in response to the COVID-19 pandemic, but the public bus system is considering longer-term adjustments to its fare policies with support from a new state grant program.

The Fairfax County Department of Transportation is one of 12 transit agencies in Virginia that have expressed interest in the Department of Rail and Public Transportation’s new Transit Ridership Incentive Program (TRIP), which will fund projects that increase connectivity in highly populated areas or remove barriers for low-income individuals by reducing or eliminating fares.

While fare collection resumed on Jan. 4, county leaders see reducing or subsidizing trip costs as one way to encourage more people to ride the Connector, which is the largest local bus system in Northern Virginia, transporting approximately 30,000 passengers on 91 routes in ordinary times.

“Access to transit is crucial in promoting equity county-wide and for many a barrier is cost,” Fairfax County Board of Supervisors Jeff McKay said. “Our Department of Transportation is committed to looking into how we can provide aid to those experiencing economic hardship.”

Created by the General Assembly during its 2020 session, TRIP was conceived before the novel coronavirus arrived in the U.S., but Virginia Transportation Secretary Shannon Valentine told the Commonwealth Transportation Board during a May 18 workshop that the pandemic illustrated how vital public transportation is for essential workers, DCist reported.

“Fares turned out to be an obstacle. So we are really trying to use this as an opportunity,” Valentine said, according to DCist.

DRPT has split TRIP into two programs: one focused on regional connectivity, which could include everything from integrated fare collection systems to the creation of bus-only lanes on significant routes, and one focused on reducing the impact of fares on low-income users, which could involve eliminating fares, creating zero-fare zones, or providing subsidized or free passes.

Virginia has allocated a total of $129 million to the TRIP initiative through fiscal year 2027, including $88.4 million for the connectivity program and $39.6 million for the fare program, according to a presentation that DRPT delivered to the Commonwealth Transportation Board. 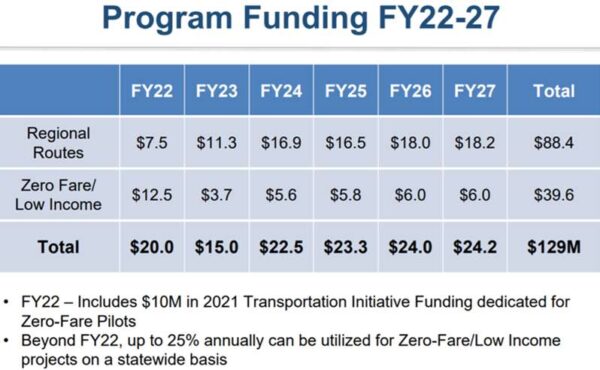 Legislators limited the fare reduction program to 25% of the initiative’s annual funding, but the General Assembly gave the program an additional $10 million in the state’s fiscal year 2022 budget, raising its total to $12.5 million for the upcoming fiscal year, which begins on July 1.

DRPT released a draft policy last week outlining how TRIP will be implemented, including how projects will be evaluated for grant funds. The resolution is open for public input through June 18, and the CTB is scheduled to vote on it on June 23.

The department has also made a draft of the program’s application guidelines available for public comment until July 7.

With the application period not opening until July, Fairfax County officials say it’s too early to know exactly what form their project will take, but Fairfax Connector already has some experience trying out different fare policies.

In addition to suspending fare collection during the first months of the pandemic, Fairfax Connector has also started providing free rides to middle and high school students under a bus pass program that began as a pilot in 2015 and was formalized by the Board of Supervisors on July 28, 2020.

“During the pandemic, we saw how much our essential workers continued to rely on bus service to travel around the county,” Providence District Supervisor Dalia Palchik said. “That is why I’m thrilled about this new state grant program, and look forward to seeing a proposal from our staff on how to best pursue it here in Fairfax.”

Pitches that the Fairfax County Department of Transportation submitted when DRPT advertised a “Request for Ideas” from Nov. 20 to Dec. 15, 2020 give an idea of the projects that the county is considering.

As a zero-fare project of interest, FCDOT suggested a subsidized pass program for people who have low incomes, which would be defined as approximately 150 to 200% of the federal poverty level, according to an RFI form provided by the county.

The department also submitted two potential regional connectivity projects: the proposed bus rapid transit system connecting Tysons with the Mark Center in Alexandria, and a route that would link Springfield and Tysons, increasing service between the north and south sides of the county, as laid out on pages 174-175 of the county’s transit development plan.

FCDOT spokesperson Robin Geiger notes that the RFIs were not official applications, but rather, feedback to give DRPT an idea of what concepts may be submitted for funding consideration in the future.

“We are excited about the prospect,” Geiger said of the TRIP initiative.

Slide via Virginia Department of Rail and Public Transportation