The Reston Association Board of Directors is set to discuss increasing member assessments, potentially by as much as $40, at upcoming work sessions in preparation to draft the 2022 budget.

At a board meeting last Thursday (May 27), CEO Hank Lynch laid out factors, questions, and known expenses that will affect the upcoming budget, which will be discussed and drafted later this summer.

His report led to the conclusion that an assessment increase will likely be needed, along with possible cuts and ways to increase non-assessment revenue. The assessment is currently at $718.

Further discussion about what this increase could look like, including a proposed percentage range that the RA board would be comfortable with, will happen at upcoming work sessions. The first one is set for June 8.

Lynch said that the potential increase isn’t needed to add new items to the budget, but rather, to catch up on projects from the previous year.

“We are not planning, right now, any new programs or services,” said Lynch. “Mainly, we are trying to get things we had in the pipeline last year that we couldn’t do because of COVID up and running this year. We are not looking to do new things for 2022.” 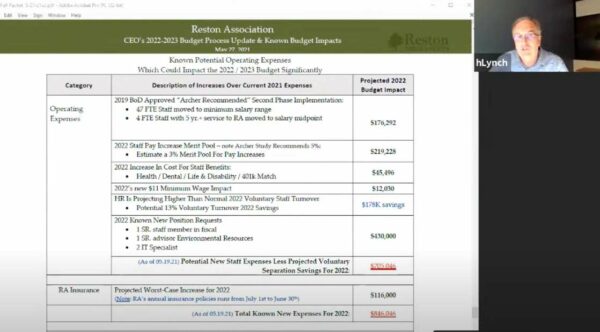 A huge impact on the budget is an increase in operating expenses, particularly staff pay increases, hiring, staff turnover, and RA’s insurance policy.

Lynch authorized a compensation study by the human resources firm Archer Company in 2019. The study concluded that staff pay increases were needed for better retention and recruitment.

Adopting the study’s recommendations would cost an additional $400,000, according to a table that Lynch presented at last week’s meeting. There are also four new positions that have been requested to be filled, which would cost $430,000.

Overall, adding in the statewide minimum wage increase as well as rising costs for staff benefits, Lynch projects that RA can anticipate approximately $705,000 in new staffing expenses for 2022, even with some savings from higher-than-normal staff turnover.

There’s also a potential for an increase in the cost of RA’s insurance policy, bringing the total dollars expected to be added to the operating budget to nearly $850,000.

Without finding cuts or generating more non-assessment revenue, the additional operating expenses would mean a 6% increase, or nearly $40, in annual assessment fees for members, according to Lynch.

That’s four times the increase that was approved last year.

While a 6% increase would be a hefty uptick in relation to the last five years, which averaged just under 2%, it would be more comparable historically to average increases prior to 2016, which averaged about 5%.

“This is an incredibly complicated budget cycle we are going into,” Lynch said. “And I think it’s going to be that way for the next couple of years.”

There are other ways to increase revenue and available budget funds besides increasing assessments. RA also generates revenue from pools and tennis passes, facility rentals, garden plots, and camps, which were cancelled last year.

But that revenue is limited and still recovering from last year, according to RA Treasurer Bob Petrine.

“There are limited ways that we generate non-assessment revenue,” Petrine said. “The only way we can cover all of these things we have to cover…is to up the assessment.”

Another way to deal with the budget challenges is with cuts and capital improvement project deferrals.

A recent suggestion was to repurpose or, perhaps, close several pools that have lower usage, a proposal that drew vehement opposition from some in the community.

The RA board briefly discussed pools during the budget presentation, with Petrine wondering if deferring maintenance on pools might help with the budget.

“If [existing pools] are in decent-enough shape, they might not have all the bells and whistles newer pools might have, [but] will they get us by?” he asked rhetorically. “Do we defer maintenance? Do we keep a certain number of pools that need renovation or maintenance out of the commission for the entire year? That can save a considerable amount of money.”

Overall, Lynch, Petrine, and the board agreed that the past year has added to the difficulty of this year’s budget process, forcing RA to make tough decisions about priorities, how to spend money, and whether to raise assessments.

“Because of COVID…everything got kicked down the road,” Petrine said in reference to last year’s budget discussion and approval. “We made a very good stab at it, but we are in different circumstances now.”